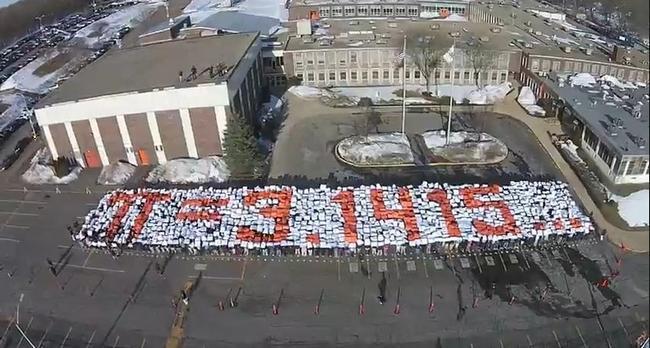 About 1,500 Diman students and teachers hold cards revealing a giant pi equation in front of the school on Friday, as seen from an aerial drone.

FALL RIVER — A quadcopter drone, hovering 190 feet in the air and equipped with a digital camera, had perhaps the best view of the more than 1,500 Diman Regional Vocational Technical High School students and teachers who stood below holding square orange and white cards.

When they flipped over the cards above their heads, the pattern formed was an equation that started with the Greek symbol for pi followed by = 3.1415.

It was masterminded by Diman math teacher Decio Matos, an admitted enthusiast for Pi Day, which occurs every March 14. This year marked a particularly special Pi Day: it represented the once a century occurrence when the numerals in a calendar year 3/14/15 align with the first five digits of the famously infinite pi, 3.1415. Pi is used in calculations related to all things circular and cylindrical: area, perimeter and volume.

Students in Diman's Drafting program devised the blueprint for where the cardholders would stand, while Matos was also the ringleader for the event.

Matos spoke into a bullhorn directing cardholders into their places, which were marked by white and orange sandbags placed in rows and columns in the parking lot. They occupied the area in front of the gymnasium all the way to Diman’s student-staffed restaurant.

“Step right up,” Matos called. “Fill in, please ... For this to work there cannot be any gaps.”

Friday was the day before the official Pi Day, but that didn’t stop teachers and students from marking the occasion at Diman and at other Fall River area schools.

Diman seniors Alanah Campos and Keanna Delgado both held white cards, but also wore glittery hoods to make sure they could be spotted in the photo.

Superintendent-Director Marta Montleon was among the cardholders, as was Machine Tool Technology instructor Kurt Chouinard. He said the number is used “all the time” by machinists.

“It’s involved in our cutting speeds. A lot of formulas revolve around pi,” he said.

The occasion was also marked in other shops and classrooms at the school: Students at other schools joined in on the pi-themed activities. At Talbot Innovation Middle School, students studied geometry and got pie to go with their studies, said Principal Jackie Francisco.At Holy Name School students read “Sir Cumference and the Dragon of Pi” and measured circumference and diameters of different items to “derive their own apprioxmation for pi,” said middle school math teacher Brittany Juszkiewicz.

Pi Day was a festive schoolwide affair at St. Michael School, explained math teacher Sandra Thibault. Students in all grades helped to create a chain of colors that corresponded to pi digits. That chain was to be displayed in the school’s hallway.

“We’re going to see how many of pi digits will actually be able to finish,” Thibault said on Thursday.

Students also brought in circular desserts, cakes, pies and pizza. Each class engaged in a pi-themed activity, including graphing and making pi bracelets.

“We wanted to make sure we were on board for the ultimate Pi Day,” Thibault said.
Copyright © 2002-2023 Blackboard, Inc. All rights reserved.