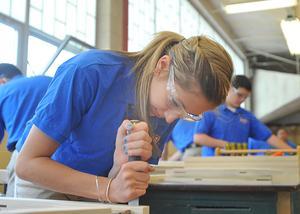 Destinee Gifford works in the carpentry shop at Diman in Fall River. Almost half the students in Gifford's carpentry class are girls, a big change from 20 years ago when girls mostly stuck to health care and food courses - and an even bigger change from 40 years ago when there were no girls in the school at all.

Maureen McGlynn was the first girl to graduate from Diman, in 1977 - the same year as Emeril Lagasse.
By Deborah AllardHerald News Staff ReporterPosted May 23, 2012 @ 07:05 PMFALL RIVER - When the Girls’ Vocational High School opened in a brick building on Morgan Street in the 1940s, course offerings were — not surprisingly — female-oriented.The teenaged girls back then were trained to become seamstresses, hairdressers and bookkeepers. It would be decades before girls could expand their career horizons.Meanwhile, the Diman High School for Boys was in full swing, founded by the Rev. Hugh Diman in 1912. “He gave money to the city to start a training facility for the correct care and use of tools,” said Brian S. Bentley, Assistant Superintendent-Director/Principal of Diman Regional Vocational Technical High School. “It started on Hartwell Street.”Eventually, the boys’ and girls’ schools would become part of today’s modern Diman facility, where the population of 1,350 students is split nearly 50/50 between the sexes.Today, boys and girls have many choices of study. It’s not at all uncommon for boys to study health careers, or to find girls building furniture in carpentry class.“Some of my top students are girls,” said carpentry teacher John Araujo, now instructing six girls in his class of 14.Student Destinee Gifford, sporting a long ponytail, peeling turquoise nail polish, and work boots, was busily sanding down a pice of wood.“It’s a challenge,” Gifford said. When asked if she felt she got any special treatment from the boys, Gifford laughed and said: “If you ask for something, they’ll go get it for you.”Today’s Diman got its official start in 1963 when John Harrington petitioned the state to open a regional school in Fall River to serve the city, along with Somerset, Swansea and Westport. It was built in 1968 and Harrington became its first superintendent-director.Diman, as it does now, functioned as its own entity, separate from the city’s school system.The Girls’ Vocational High School, part of the city’s school system, continued to function on Morgan Street. Though girls were not technically kept out of Diman, they did not attend the school.“There was an overwhelming feeling that Diman was a boys school and only boys went there,” Bentley said. “They didn’t have the programs to attract girls.”But things were about to change.“In 1973, that barrier was broken,” Bentley said.Six girls signed up to attend Diman that year. Only one would make it through all four years of high school. That was Maureen M. McGlynn, who graduated from food trades (today’s culinary arts program). She was the school’s first female graduate in 1977. She is pictured in the yearbook, just a few pages after the school’s most famous graduate: Emeril Lagasse, also a graduate in food trades.Over the next few years, female attendance continued to be light. The new B.M.C. Durfee High School opened on Elsbree Street in 1978, and the old Girls’ Vocational High School was closed. Durfee offered cosmetology, food services and other vocations. Diman expanded its offerings, too, with painting and decorating and graphic arts. When Bentley began his career as an English teacher at Diman in 1976, there were just 45 female students in the building of more than 700 kids.For those girls, “There were all the pressures that come with that,” Bentley said. “That was a different world. (The girls) really had to have the composure and mindset.”Diman started to attract more girls over the coming years when it started a health careers program in 1985 in response to the need for certified nursing assistants in the area.“That opened the flood gates,” Bentley said. “It was predominantly female.”A dental assisting program came next, and more girls applied to Diman.With more and more girls, there were changes. A cheerleading team emerged in 1978. Then came female athletics, with cross country being the first to draw girls, and then basketball and softball.Proms and dances began to occur with greater frequency and gusto. The first female valedictorian graduated in 1992.As the female population grew, Bentley said, there were some astounding changes for the boys at Diman.“The first thing they did was groom the male population,” Bentley said. “The boys became more attentive to their appearance.”The boys’ manners, Bentley quipped, “improved significantly in the ‘80s.”One of the newest programs at Diman to attract a large number of females is office technologies. Some of the girls have job offers by their junior year, and generally work in doctors' and lawyers' offices, and as business managers. Boys, of course, are allowed.“The idea of a boys vocational school is long gone,” Bentley said. “It’s changed for the better.”Go to Diman news.
Copyright © 2002-2022 Blackboard, Inc. All rights reserved.