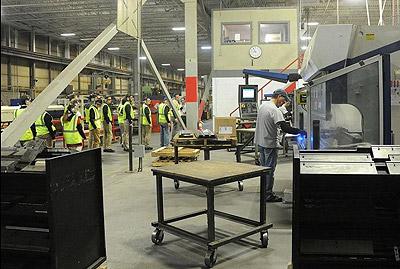 Diman students during a tour of the Whirlpool plant in Fall River.
Herald News photo / Dave Souza
FALL RIVER — The first thing that strikes you about the factory floor at Whirlpool is that it’s clean and relatively quiet, a long way from the greasy, roaring factory floors of the past.

“This isn’t the factory where your grandparents worked,” said Raoul Rincon, plant director at Whirlpool.

The audience was about 20 students from Diman Regional Technical Vocational High School, some of whom may well end up welding in or supervising a plant just like the Whirlpool facility.
“We have a lot of technology. We have a lot of robots.”

“We want to show you the potential there are for careers in a factory,” Rincon said, just before the tour began.

Whirpool’s Currant Road facility in the Fall River Industrial Park is the smallest of Whirpool’s American facilities, focusing on the industrial dryer market and doing a lot of custom work. The plant employs 250 people, shipping dryers to 90 countries.

Manufacturing plants are heavily computerized these days, Rincon noted. He pointed to a large television screen suspended above the factory floor.


“That screen shows us how many units we built today,” he said.
A lot of the work is high tech in nature.

Rincon pointed to a man feeding sheet metal into a machine that cuts it to precise measurements with a laser.

And he ticked off some of the departments.

The plant was busy, but none of the really huge dryers were being made Friday. Rincon pointed out a drying drum four feet in diameter that end up inside some of the larger machines.

“It’s so large, we put wheels on the bottom and push it,” he said of the larger machines the company builds, showing how wheels are placed under the huge dryers so they can be moved throughout the plant.