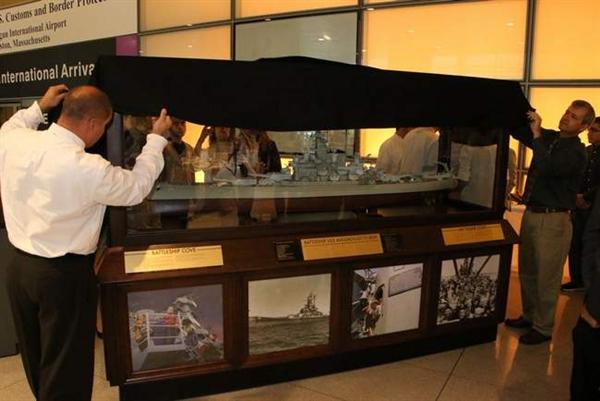 Drafting instructor Mitch Sweet, left, and building and property maintenance instructor Michael Berube unveil a display case holding a model of the USS Massachusetts at Logan Airport in Boston.
Students involved with the display
Mike GagneHerald News Staff ReporterBOSTON — The Diman Regional Vocational Technical High School students who collaborated to make a 6-foot-tall, 9-foot-long cherry wood display case with plaques and framed photos — out of what was previously a pile of lumber — had already seen their project mostly complete.But until Friday morning, they hadn’t yet seen the case with an important piece: a 7-foot-long model of the USS Massachusetts provided by the Fall River Marine Museum.Students had taken a bus trip from their school in Fall River that morning to see the project installed in its permanent location, near the international arrivals gate at Terminal E of Logan International Airport.Orlando Cotto, a student in Diman’s Building and Property Maintenance shop, was among the 21 students from the school who arrived at Logan with their instructors to see the project unveiled. He was taking it all in.“It’s amazing that it’s here,” Cotto said.Cotto and classmates Nathalia Martins, Linoshka Acevedo and Rashid Dorvil explained their roles in making the case: sanding, spray-painting, applying the finishing touches.“It’s cool. It looks good,” Martins said.“To see it come out of the lumber rack to a finished project is amazing,” said Andre Camara, a senior carpentry student who noted that he was a junior when he and other carpentry students worked on the project.Property maintenance and carpentry were just two of the five shops and one after-school club — the photography club — whose students had worked on the project over the past 10 months.“It’s amazing,” said Alexander Begin, a Diman graduate who designed the case last winter when he was a senior in the drafting shop. “It came out way better than I had ever thought. But it wasn’t just me. It was all of us. We worked as a team.”The plaques and posters displayed were designed and completed by students in the Machine Tools Technology and Graphics Communications shop.Students also marveled at the detailed model their case now holds.Local legislative leaders, leadership from the Marine Museum and Battleship Cove were joined by officials from the Massachusetts Port Authority for the unveiling. Along with the display case, a video about Battleship Cove plays on a loop.“We are proud of all of you,” state Sen. Michael Rodrigues told students prior to handing them state citations for their work in the project.“You have really put Fall River on the map,” state Rep. Carole Fiola said.Earlier Fiola spoke with students individually, including Begin.“You designed the case?” she asked Begin. “It’s beautiful, just beautiful. And to think, this is on display for the world.”Other officials made similar remarks. MassPort CEO Thomas Glynn noted how many people will pass through the arrivals gate at Terminal E each year.“Six million people will pass through those doors,” Glynn said. “This is a great enhancement for us.”“The craftsmanship of the model is amazing,” said Battleship Cove president Brad King. “So, too, is the professional expertise of Diman Regional Vocational Technical High School.”“It literally took my breath away,” King said of seeing the case. “This is a great day for our community.”“My thanks to Battleship Cove for giving our students the opportunity to demonstrate their skills,” Diman Superintendent-Director Marta Montleon said. “This is truly a project that’s an example of collaboration and cooperation.”Marine Museum President Margot Cottrell said she saw the case when it departed from the museum Thursday to be brought to Logan.“It’s very exciting,” Cottrell said. “I was overwhelmed. They have done a fantastic job.“We knew it was going to come out this good.”“This is really exciting for the kids. It’s a special event,” said Diman carpentry instructor Manny Botelho. “This will be something they’ll remember.”
Copyright © 2002-2023 Blackboard, Inc. All rights reserved.