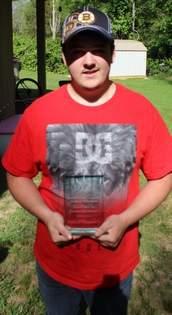 Now that his June 4 graduation is behind him, Malenfant will apply the same drive that propelled him toward his accomplishment into establishing a career in the machine tool technology trade.

Malenfant said his perfect attendance had earned astonished reactions from his classmates.

“They couldn’t believe it,” he said. “(They’d say) ‘Oh, you never get sick, how could you come to school every day?’”
After beginning his educational career in East Gate Christian Academy’s pre-k Kindergarten and kindergarten programs, he attended Westport Elementary School.

After leaving there with his attendance still unblemished, he said he was inspired to pursue that achievement for his entire school career out of a sense of personal satisfaction. As he entered Westport Middle School, he made that honor his new objective.

Although his efforts easily could have been hampered by an impossible-to-prevent illness, Malenfant said he was fortunate enough to never fall ill on a school day.

“Every time I got sick was usually on the weekend or vacations,” he said. “It fell just perfect, right on those days."

In 2011, he enrolled at Diman. Fascinated by what could be designed and made with just a simple piece of metal, he entered the school’s Machine Tool Technology shop. “You can make anything, just about,” he said.

He honed his skills during his four years at the school through numerous projects, with his favorite being a replica of the Stanley Cup he crafted during his freshman year out of a piece of aluminum. “You’re proud to say ‘I made that,” he said.

He noted that his work on all of his projects was fueled with the same perfectionism that helped him achieve a spotless attendance record.

Diman officials recognized his achievement with a plaque they presented to him at a Senior Awards Banquet. “It’s quite an accomplishment being the only one,” his mother Annette Malenfant said.

As he graduated, Malenfant breathed a sigh of relief as his accomplishment sunk in. “I could finally say I went 14 years without missing a day of school,” he said.

With his school years behind him, Malenfant is hoping to begin his career at a business in the SouthCoast region.