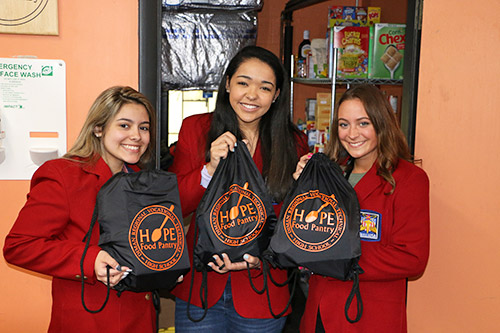 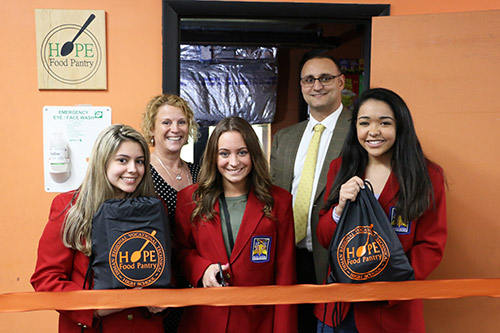 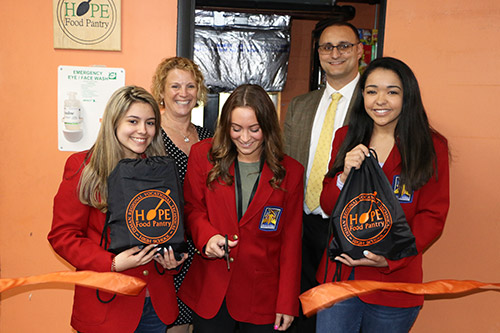 When students Jesenia Delrosario, Savannah Carvalho, and Celina Andreoli began to research the poverty and homeless student population in Diman, they began to create a plan to tackle this problem. What started as a SkillsUSA community service project quickly turned into a passion and life changing project for these three girls.

The current need in their community sparked the creation of the Diman SkillsUSA H.O.P.E Food pantry, which stands for Helping Other People Eat.

They first began by finding a space to put their project in and also getting approval from the school with the help of their principal Dr. Ferreira.

As soon as approvals were given and arrangements for the space were set up, they began to connect with the community. Flyers were placed in various locations in the community and they received an overwhelming response from others.

One of their outreaches with the community included The Montessori School of the Angels which is located in Westport MA, who donated over 500 non-perishable food items. To take this project a step further, they worked alongside Diman's Director of Guidance, Mrs. Miller, who helped them coordinate how students would be able to pick up their food items.

Once this was established they also worked alongside Diman's Graphic Communications shop to create bags for students to pick up non-perishable food items in. The drawstring bags were funded by the Diman Key Club.

The Building and Property Maintenance shop also was able to become involved with making the signs for the food pantry room.

Faculty, staff, administrators, and students were present for the grand opening and ribbon cutting event on Friday, April 12th, 2019. Jesenia, Savannah, and Celina were able to collect over 600 food items as of now and will begin to distribute food items to any student in need.

They are looking forward to expand their food pantry to more students, and eventually to the public.