Diman just won a $2.5 million grant. Here's what they plan to spend it on. 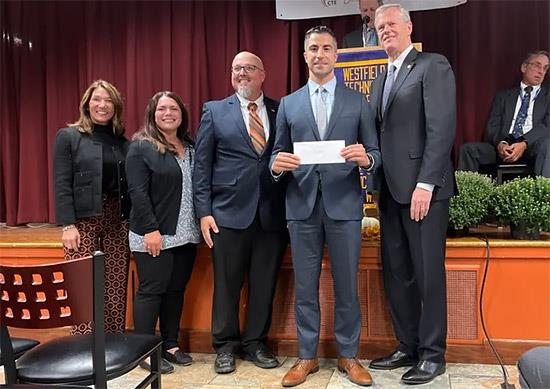 “For Diman to receive this amount of money is special,” said Andrew Rebello, the school’s principal. “This is really gonna expand the ceiling of opportunity for students.”

Diman received $2.5 million in state money through the Skills Capital Lab Modernization Grant. It will go to the school’s advanced manufacturing and dental assisting programs. On Tuesday, Gov. Charlie Baker presented the check to representatives from the school and other grant recipients at a ceremony in Westfield.

Rebello said that advanced manufacturing in particular is a rapidly expanding industry. That program will use the grant money to purchase a RoboDrill and a five-axis machine, two pieces of equipment frequently used on the job by CNC machinists who program and operate computerized machinery.

Kurt Chouinard, an advanced manufacturing teacher at Diman, said the two new pieces of equipment will make graduates more attractive to potential employers because they will have already received training on real machines.

“It’s replicating what they’re going to see in industry in the real world. It’s not just simulation software and they’re not just watching a video,” he said.

Chouinard said he’s heard from students doing paid internships while in school that they sometimes help train permanent employees to use equipment they’ve used at Diman, and the newest additions will continue that trend.

“It’s not something you can really put a price tag on, what the kids are gaining in experience,” he said.

The dental assisting program plans to buy a 3D printer and a cone beam computed tomography machine that will allow students to take three-dimensional images of mouths and create physical models of them.

Priscilla Wicks, a Diman dental assisting instructor, said she still works in dental assisting during the summers and that more and more dentists are using such machines in their own offices instead of relying on specialists, and that dental assistants are often the ones operating that technology. The 3D images include both hard and soft tissue that make it easier to identify diseases inside the mouth, while the models are helpful in fitting things like dentures, retainers and crowns, she said.

“That’s been on our wishlist for a while so we’re thrilled we’ve been able to get it,” she said.