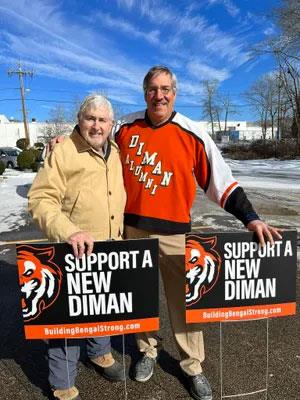 Arthur Arruda (left), Diman class of 1956, and Karl Hetzler, class of 1978, pose with signs supporting the project to construct a new building for the school. Photo from Sally Cameron.

SOMERSET — A Special Town Meeting on Monday night approved the plan for Diman Regional Vocational Technical High School to construct a new building, allowing the project to move on to the next phase.

“It feels amazing to be another step closer to where we want to be,” said Elvio Ferreira, Superintendent of Diman’s school district.

All but a handful of the approximately 150 registered voters in attendance voted to approve the sole article on the warrant. The advisory and finance committee voted to suggest a favorable vote on the article.

There was no discussion before voting, apart from a presentation from Ferreira and Greg Joynt, an architect from Kaestle Boos, the architectural firm involved with the project.

Ferreira told voters that the building was considered state of the art when it was built in 1968. At the time, it was designed for 800 students, all boys. Now, Diman is co-ed and has a student body of more than 1,400 students.

“Now, in 2022, our campus is simply tired and worn,” he said. “We have fallen behind in both space and resources.”

Joynt said the district has done its due diligence in maintaining the building over the decades, but there are still structural problems to with parts of the building including its roof and exterior. The school typically spends between $100,000 and $250,000 each year on abating problems like hazardous materials built into the school such as asbestos and stains from water damage. Fixing the most pressing problems would cost about $6.8 million, he said. Doing all of the needed renovation and expansion would cost between $156 and $161 million.

“This is simply a matter of a building reaching the end of its useful life,” he said.

According to space standards set by the state, Diman should be 394,650 square feet large, Joynt said. The current building includes 234,416 square feet of space.

Construction of the new building would begin next year and take three years, after which the current Diman would be demolished. The new school would be built on what is currently their football field.

The meeting was separate from the Town Meeting that will vote this spring on approving Somerset’s portion of funding for the project. The Massachusetts School Building Authority has agreed to reimburse up to $145.7 million of the approximately $293 million project, leaving the district on the hook for around $145 million. Somerset would be expected to pay 9.8% of that. This would be the town would pay $825,000 annually for the next 30 years, with an expected tax impact of $26 per each $100,000 in property value.

Ferreira said that, of the hundreds of Somerset residents who have graduated from Diman over the decades, many have become local business owners or otherwise contributed to the town’s economic advancement.

“A new Diman would offer that opportunity for a new generation of students,” he said.