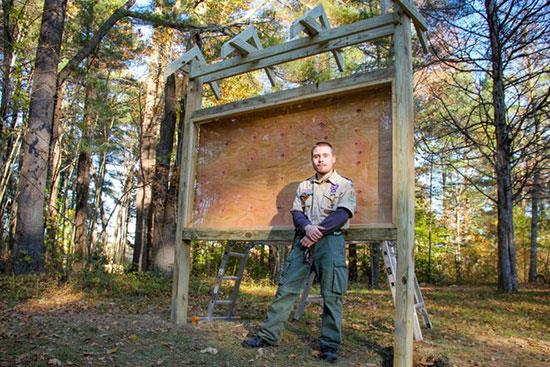 Scout Joe Larviere Jr. stands in front of the information kiosk he's building at the Watuppa Reservation parking lot on Blossom Road in Fall River on 11/8/21. The kiosk is his Eagle Scout Service Project, and will hold maps and other inforamtion for hikers about nearby trails Dan Medeiros. 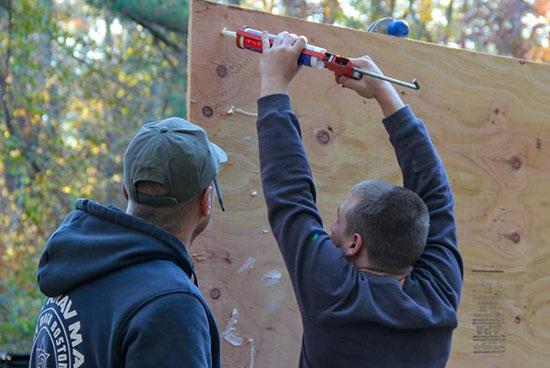 Under the eye of his father, Joe Lariviere Sr., Eagle Scout candidate Joe Lariviere Jr., 17, applies a bead of adhesive to a sheet of plywood during the construction of an information kiosk at the Watuppa Reservation parking lot on Blossom Road in Fall River on 11/8/21. Dan Medeiros 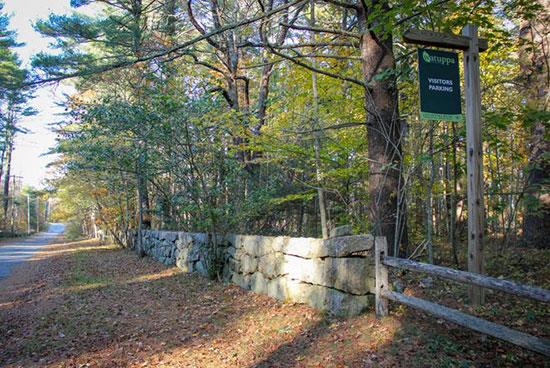 The information kiosk is being built at the Watuppa Reservation parking lot on Blossom Road in Fall River, just south of the Water Department's reservation headquarters. Dan Medeiros

Lariviere, a 17-year-old senior at Diman Regional Vocational Technical High School, has built an information kiosk in the Southeastern Massachusetts Bioreserve to guide hikers along some of the area’s trails. The Scout in Fall River’s Troop 15 has made this his Eagle Scout Service Project — a project that he conceives, leads and accomplishes, and that benefits the community at large.

He and his father, Joe Lariviere Sr., spent several days at the Watuppa Reservation parking lot on Blossom Road, prepping and building the kiosk. It’s a 4-by-8-foot wooden structure that will hold maps and information about the nearby trails.

“I picked this particular project because a while back I was actually down on this trail and you wouldn’t even really notice there was a trail here or where the trail began,” Lariviere said. “Because there’s literally just a parking lot and there’s nothing to guide anyone anywhere.”

The project is fairly simple, but one that’s desperately needed to make the city’s extensive network of nature trails user-friendly. Fall River has 50 miles of nature trails in its vast eastern woodland, but few are well-marked the way hiking trails are in other state parks.

The parking lot is just south of the city Water Department’s Watuppa Reservation headquarters on Blossom Road. Just beyond the parking lot is the beginning of what Bioreserve maps call the Homestead Loop trail — but there’s no actual signage pointing that out here, and no maps in sight. For newer hikers and people unfamiliar with the area, exploring is intimidating. The kiosk will fix that.

“By adding a sign here, it actually directs you toward the trail and it makes the area look nice," Lariviere said.

The idea to take his Eagle Project to the Bioreserve came to Lariviere about a month ago, he said.

“We do plenty of hiking around here. If we have to do any map work outside for merit badges, we’ll probably come here, and for hiking and whatnot — whether it be trailside cooking, area cleanup, possibly and a quick search-and-rescue drill,” Lariviere said. “So this is kind of another way just to give back — saying, ‘Hey, we used your property for so long to do all this other stuff. Have a sign!'”

He worked with city forester Mike Labossiere to get a plan and design for the kiosk, and collaborated with him a bit based on what materials were available. He built it under the supervision of his dad, a machinist at AA Precision Machine Co. in the Industrial Park. That company also put up much of the funds to build it, along with other local businesses and family friends. The two estimate they’ve spent about $1,000 on the project. Labossiere pitched in with cedar shingles that will protect the kiosk from the elements.

At Diman, he’s learning programming and web development. But out in the woods with his dad, he’s picking up some valuable lessons on carpentry and engineering.

Only about 4% of Scouts ever reach the rank of Eagle Scout. Though others in his family have been Scouts, Lariviere said, he’d be the first to reach the Eagle rank.

“I have been in it since Cub Scouts, since I was about 6 years old,” Lariviere said.

The process of becoming an Eagle Scout isn’t about finishing just one project, though, as useful as it is. This is only one moment in the years of effort Lariviere has put in.

“In order to get there, you really have to stick with the program. You can’t just lie around and do nothing. You have to really, really get involved with a lot of this stuff. Go to most of the events. Join different events and try to get involved in the entire program," he said. “Eagle Scouts, you have to have about 21 merit badges and then a service project and a position of leadership, among other things too, to have everything all set. It takes a lot to get to this point, and you can’t just do it by lying around and sitting on the sidelines. You have to be involved and be on the front lines of that.”