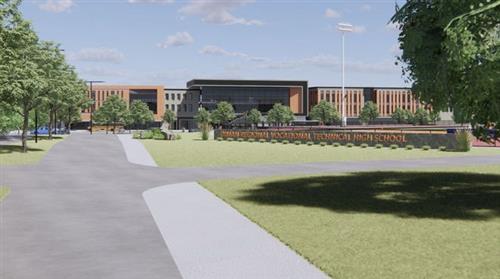 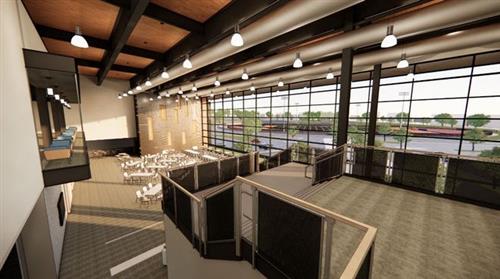 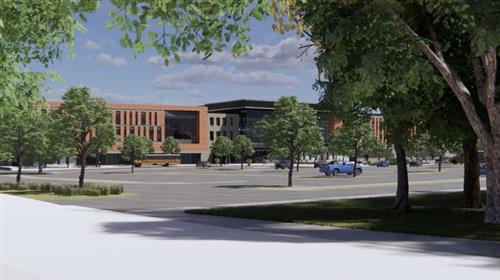 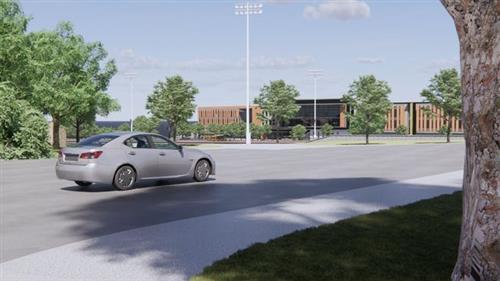 FALL RIVER — Diman Regional Vocational Technical High School is moving ahead with plans for a new building, submitting plans to the state for a four-story building that would increase the school’s square footage by more than 50%.

“It really is going to take us into the 21st century when it comes to academic and technical education,” said Dr. Elvio Ferreira, Superintendent of Diman’s school district.

At a meeting last Thursday, Diman’s School Building Committee approved final plans for the new building that they will now submit to the Massachusetts School Building Authority, a quasi-governmental agency that works with school districts to fund major construction projects.

As part of the MSBA’s process, the district weighed the costs and benefits of constructing an entirely new building versus making major changes to the existing one. They ultimately opted to pursue constructing a new building, citing factors like the disruptive impact on learning that construction on the current building would cause and the fact that the needed renovations would rival the cost of an entirely new school.

Ferraira said the school’s academic classrooms and vocational shops are far smaller than the guidelines laid out by the state for classroom size. The school was grandfathered in from having to follow those guidelines, but bigger rooms would allow for more, better equipment and more space for instruction, he said. Currently, they have five lunch periods because the cafeteria is too small and have retrofitted storage space into offices so former offices can be used as classrooms. The new buildings would bring academic classroom sizes from 500 square feet to 800, and double the size of many of their technical shops.

“That’s an exciting situation for us because we know in our current building, we have programs, both technical and academic, that are significantly undersized,” he said.

The building itself is in relatively good shape considering its age, Ferreira said, but has some deficiencies. These include cracks in the building’s outer walls, a roof that’s mostly original to the building and the fact that the school only has a lift for wheelchair users, not an actual elevator.

“The vast amount of the building is original," he said.

The plans include environmentally-friendly design features, like a geothermal heating and cooling system. These elements, along with the fact that the district has done a relatively good job of maintaining the current building, prompted the MSBA to increase the percent of the project it is willing to reimburse the district for, from 68% of eligible elements to about 79%.

Some parts of the planned new building, like district offices, are not eligible for state reimbursement. So, the state will actually reimburse up to 52% of the $293.2 million project.

The district formally submitted their building plans to the MSBA on Oct. 28. The agency’s board will meet on Dec. 15 to discuss possible funding awards for several districts, and Diman is hoping to be on the agenda for that meeting, Ferreira said. If all goes according to plan, the school’s sender communities — Fall River, Swansea, Somerset and Westport — would vote on funding their share of the project next spring.

The district’s regional agreement requires that Fall River pays about 76% of the district’s costs, Somerset pays approximately 9%, and Swansea and Westport pay about 8% and 5%, respectively. Those proportions would also apply to funding the new building project, Ferreira said.

The current Diman building might not be in as dire shape as the former B.M.C. Durfee High School building, but Ferreira said the project would go a long way toward increasing the quality of education that the school offers. Other vocational schools like Cape Cod Regional Technical High School, which opened a new building this year, and Minuteman Regional Vocational Technical High School in Lexington, which opened a new building in 2019, can offer instruction with state-of-the-art equipment with ample space for students to get creative, he said.

“We’re far behind the state,” he said.