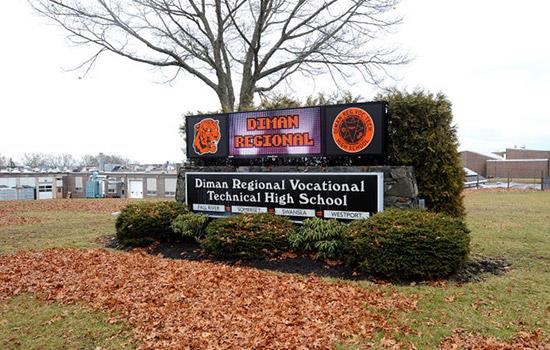 FALL RIVER — Diman Regional Vocational Technical High School will present its preliminary plans for either a new school building or major renovations during a public meeting later this month, as the school hopes to move forward to the next step of completing the project.

“It is important for the community to know that there is a huge need,” said Superintendent Elvio Ferreira. “There are a lot of students who want to get into Diman Regional who simply can’t because of our limitations on enrollment because of space and square footage.”

The district is nearing the end of its “feasibility phase” for a major project at Diman with the Massachusetts School Building Agency, a quasi-governmental agency that partners with school districts to help plan and fund major school construction projects. In order to work with the MSBA, the district must explore and present all its options for updating the building, including making major renovations, adding a new wing or constructing a new building entirely. Architectural firm Kaestle Boos Associates, Inc. is doing design work for the project and drew up plans for multiple scenarios.

While there has been no final decision on whether the district will build a new building or do renovations on the existing structure, Ferreira said they’re leaning towards a new building and will include this recommendation in their submission to the MSBA.

After receiving the plans drawn up laying out the feasibility of several options, the MSBA will either approve a plan or send them back to the district for more work. If the plans are approved, the district and Kaestle Boos can move forward with creating a more detailed design.

“By the end of this month, our hope is to have the MSBA approve what they’re saying is the best process for us moving forward” with regard to constructing a new building or doing renovations, Ferreira said.

Over the past year, the district has held several public meetings to get input from community members on a potential project design. The district's MSBA School Building Committee approved the preliminary plans on Feb. 8.

On Feb. 23, representatives from Kaestle Boos will present their potential plans for each scenario to the community, including aspects like cost. The district will send the plans to the MSBA the next day.

Ferreira said space limitations were the impetus for launching into a major building project at the school. Diman’s current building opened in the 1960s with the plan of accommodating 800 students. A new wing added in the 80s was intended to bring capacity up to around 1,000 students. But now, enrollment is at more than 1,400. Classrooms and workshops are too small to meet the needs of the state-mandated curriculum, the athletic fields fall short of what’s needed and the school is running out of parking space, Ferreira said.

“Our campus is 26 acres, and we’ve taken advantage of every square inch,” he said. “There’s only so much you can do with limited space.”

The community forum to hear from Kaestle Boos on preliminary plans for a major project at Diman will be held online at 7 p.m. on Tuesday, Feb. 23. For more information, go to the school's website.