Felicia Mendonca graduated twice from Diman. Initially as a high school student, then the Diman School of Practical Nursing, she continued her education successfully pursing a doctorate degree as a nurse practitioner. But with the critical need for nurses amid the coronavirus pandemic, Felicia put aside her plans of serving locally as a nurse practitioner to help out during the COVID-19 crisis as a traveling ICU nurse, recently finishing an assignment in El Paso, Texas.

Take a few minutes to read this brief article from The Herald News as we share a remarkable, inspiring, and real account from one of our truly heroic essential workers.
Linda Murphy
The Herald News 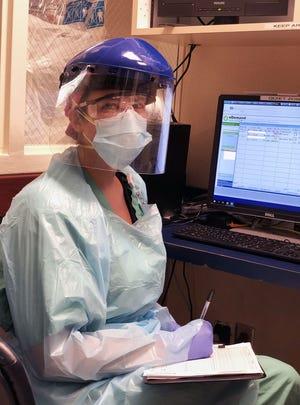 Felicia Mendonca is seen wearing PPE she uses to care for patients in a COVID-19 ICU in El Paso (submitted photo)
FALL RIVER — Eight months after working at her first assignment in a COVID-19 hospital, traveling nurse Felicia Mendonca can barely hold back tears recalling one particular couple in the early days of the pandemic.
Back in March, Mendonca was working at M Health Fairview Bethesda Hospital in St. Paul, Minnesota, the first hospital in the country to accept only COVID-19 patients. “That’s when I realized how bad coronavirus was and honestly, how sad it was that people couldn’t see their families when they stopped all visitations,” she recalled.

One of her patients, a woman who contracted COVID-19 while working in a nursing home, was in the ICU on intubation. A few days after she was admitted, her husband, who also contracted COVID-19, was also put into the ICU on intubation. They put him in the room next to her, but as they both ended up sedated and paralyzed as part of the treatment, the wife had no idea her husband was even in the hospital. After about a month, as the woman was finally woken up, they had to tell her that her husband was in the next room dying.

“We had to tell her that her husband is next door, he’s been here the whole time with you and he’s about to take his last breath,” she said, adding they put her in a wheelchair and wheeled her into the next room so she could be by his side when he died. “There are things like that that just stick with you. Trust me, I believe all nurses have PTSD from this.”

Mendonca said it’s discouraging for the nurses to see their patients struggling on Bi-PAP breathing apparatus. “Not just as an ICU nurse, just a nurse. You’re trying so hard as a team and patients are still struggling and they’re still dying. Since Minnesota, I have thought this is very real,” she said. “You can see them fighting to breath day in and day out.”

After days of fighting to breathe on a Bi-PAP, she said one patient was so grateful to be told she was going to be intubated so she could get a rest. “My heart sank with that. I didn’t want her to thank me because usually the outcome isn’t a good one. It’s hard to be encouraging when you know how the outcome usually is,” she said fighting back tears.

Mendonca, a Swansea resident and former resident of Fall River and Westport, graduated from the nursing programs at Diman Regional High School and Bristol Community College before deciding to pursue a doctorate degree as a nurse practitioner at University of Dartmouth. After five long years of study to become a nurse practitioner, she attained that goal, graduating in May.

But with the critical need for nurses amid the coronavirus pandemic, Mendonca put aside her plans of becoming a nurse practitioner to help out during the crisis as a traveling ICU nurse.

At the time of the interview on Nov. 24, Mendonca was a week or so shy of finishing up a contract with FEMA at Del Sol Medical Center in El Paso, Texas, one of the hottest COVID-19 spots in the country. There were so many cases, she said the ICU overflow of COVID-19 patients were in parts of the OR and they had tents set up outside for non-COVID-19 medical/surgical procedures.  “It’s just things we have never had to experience before,” she said. “You hear about it, but you never really think it’s this bad. And it’s pretty bad.”

Travel nurses, she speculated, might not have it as tough as the nurses who work in the hospitals in the COVID-19 hotspots day in and day out because at least the traveling nurses know there’s an end to their contract. “I don’t know how they do it…. I give them a lot of credit not knowing there’s an end to it. Or when there’s an end. We need one here; we’re hoping for one,” she said.

The hospital in El Paso is the worst she’s seen of the pandemic. Some of the traveling nurses who worked in New York during the height of the pandemic last winter and spring told her it was even worse in El Paso in terms of the numbers of patients and the capability to deal with them, she said. “This is the major hotspot. Usually they have two ICUs and now they have like six ICUs,” she added.

The traveling nurses are staying in hotels in El Paso in private rooms in case they contract COVID-19. So far, Mendonca has not contracted it at any of her assignments over the past nine months.

Mendonca is working in what is known as a “dirty ICU” with all COVID-19 patients. Because the virus is always hanging around, the nurses are always in PPE: gowns, gloves, an N-95 mask, a surgical mask, goggles and a plastic face shield. “If you thought nurses didn’t drink beverages or go to the bathroom enough before, we definitely don’t do it now…. We don’t want to de-gown,” she said.

Working six days a week, 12- to 14-hour days, she said they typically only get a lunch break as there’s so much going on and the nurses don’t want to step away from their patients’ monitors.  Typically, she said they’re given two ICU patients on their shifts.

When the shift is done for the day, she said she’s sometimes so tired she skips dinner and takes a shower and goes to bed by 9 p.m. The shuttle to pick up the nurses in the morning arrives at 6:15 a.m. “It’s a cycle where you sleep, work, sleep work,” she said. 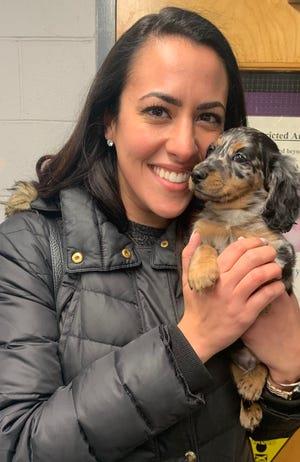 Felicia Mendonca is seen in less stressful times with Frakie, the dog she shares with boyfriend Chris Carreiro (submitted photo)
Since she started in March, Mendonca took a month and a half off during the summer. In addition to El Paso and Minnesota, her nurse contracts this year have been in Washington state briefly and South Weymouth for 13 weeks. Her next assignment, she said, will likely be in the Boston area so she can stay close to her family. “I came out here because I wanted to put myself into a COVID hotspot and see what they were going through,” she said. “I jumped right into the fire.”

Her mother, Oriana Mendonca, of Fall River, is proud of the work she does, she said, but naturally, she also worries about her. To ease her mind, she tries to call her twice a week when she’s away on a travel nurse assignment.

Swansea select board chairman Chris Carreiro, her boyfriend of three years, is her biggest supporter, she said, adding, “I try not to tell him too many of the bad things because I don’t want our conversations to always be dark and gloomy.”

Mendonca’s contract in El Paso ended on Dec. 3 and she was planning to take at a month off before taking another contract to give herself a break. “It’s very exhausting,” she said.