‘We also discovered our ability to improvise’: Diman Class of 2020 praised for perseverance 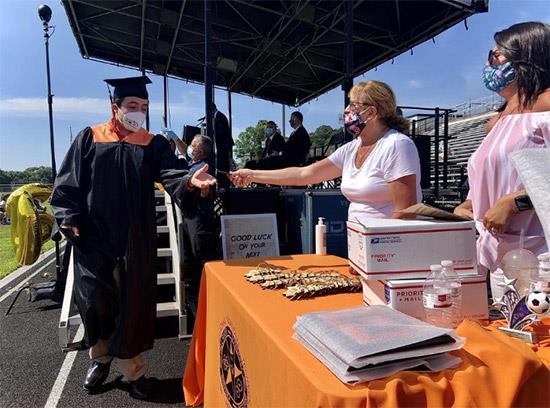 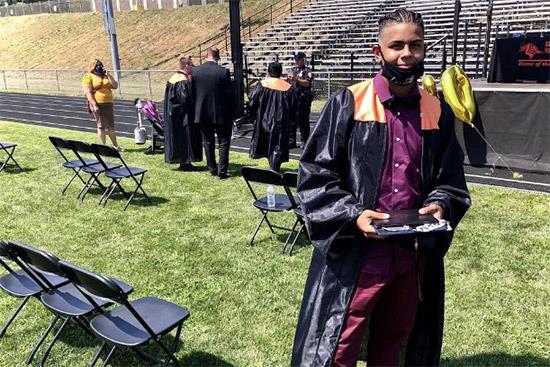 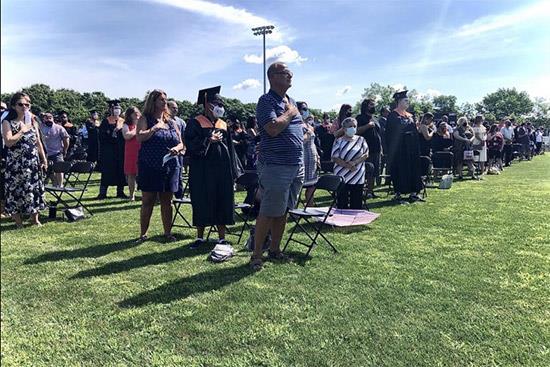 Parents and other relatives of the Class of 2020 are seen here Saturday morning while the Star-Spangled Banner was sung. Herald News photo by Charles Winokoor. 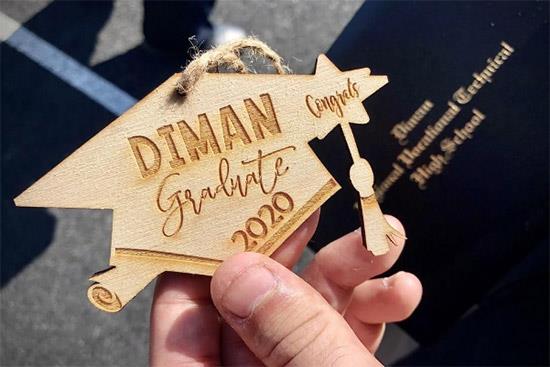 Class of 2020 graduates were given custom-made wooden ornaments after collecting their diplomas. Herald News photo by Charles Winokoor. 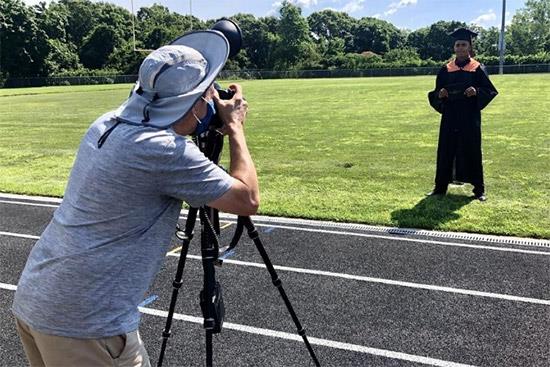 A photographer is seen snapping a photo of a Class of 2020 graduate at Diman's commencement exercises. Herald News photo by Charles Winokoor. 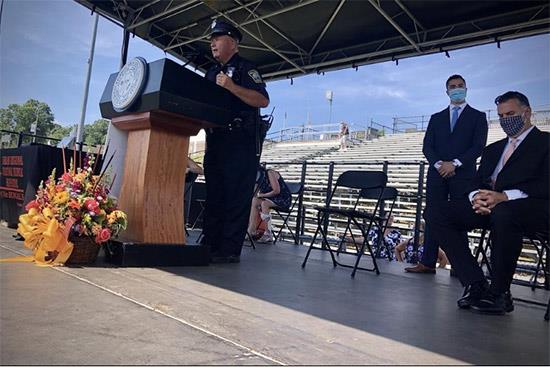 In what might have been billed as phase one, half of the school’s 328 graduates received their diplomas at a 10 a.m. commencement exercise held on the John P. Harrington Athletic Fields.

The morning event, which was held under a nearly cloudless sky in 86-degree heat, was celebratory, although somewhat subdued, and orderly.

“You punched your way through,” said Fall River Mayor Paul Coogan, as he congratulated this year’s graduating class.

Coogan was one of just two guests sitting on the school’s mobile stage, which had the benefit of shade. The other was school committee member Jeffrey Begin of Swansea.

Dividing the graduation ceremony into two events made it that much more manageable for the school to follow social distancing guidelines, as outlined by the federal Centers of Disease Control and Prevention.

Due to the COVID-19 pandemic, each Diman Voc student was allotted a maximum of two tickets for family members, with each group of three sitting at least six feet apart in folding chairs set up on the athletic field.

Schools in Massachusetts that have opted to hold outdoor graduation ceremonies this summer have been setting their own parameters in terms of the number of invitation tickets per student.

A week ago, for example, when Bristol County Agricultural High School in Dighton held commencement exercises each student was permitted to invite four guests.

“Not even a global pandemic could stop you from achieving your goals,” Diman Superintendent Elvio Ferreira told Saturday morning’s graduating seniors.

Ferreira said the lyrics of the 1988 Rod Stewart song “Forever Young” were emblematic of the spirit of optimism and strength he was trying to convey.

“May you grow to be proud, dignified and true, and do unto others as you’d have done to you,” Ferreira recited.

March 16 was the last day this year that classes, both academic and shop, were held inside Diman’s school building. It came less than a week after Gov. Baker declared a state of emergency.

Assistant Superintendent and Principal Andrew Rebello described the Class of 2020 as nothing short of “remarkable.”

“We weren’t perfect,” Rebello said, referring to the challenges of remote learning. “But I believe all of you are stronger, smarter and more capable because of this. Once a Diman Bengal, always a Diman Bengal. You are forever Diman strong.”

He later provided documentation showing that Diman, according to the U.S. News and World Report list, in the category of “math and reading performance” ranked 20th this past year among the state’s 345 “ranked schools.”

The data also shows that Diman in the same category ranked 1,006 among nearly 17,800 nationally ranked schools.

Rebello says that the “chronic absentee rate” at Diman has dropped from 12 percent in 2018 when he became principal to 4.8 percent.

He also emphasizes that graduates of the school embark on diverse career paths.

“We offer a diverse group of options,” Rebello said as he stood next to Daniel Reis, after the hour-long commencement exercise had concluded.

Reis, who graduated from Diman with a carpentry degree, said he has a full scholarship to attend a four-year program at Roger Williams University for construction management.

He says after graduating he’ll be qualified to “manage a whole construction project by myself.”

Fellow grad Pedro Navarro, on the other hand, says he’s going to work full-time for his stepfather and uncle, who own a local exterior siding and trim business.

“I plan to work a year and then open my own construction company,” he said.

Navarro, 18, said he was born in Puerto Rico and was nine when his family first moved to Providence and then Fall River.

He says he started listening to motivational speakers on the advice of his teacher when he was a seventh-grader at John J. Doran Elementary School.

Navarro said he’s a big fan of Eric Thomas, also known as E.T. The Hip Hop Preacher, and quotes a line Thomas delivered more than a decade ago that “when you want to succeed as bad as you want to breathe, then you’ll be successful.”

Thomas, in a more recent online video, urges his audience to “stop being a victim” and to “work and fight to become a victor and not a victim.”

This year’s Diman Voc valedictorian Landon Begin, son of school committeeman Jeffrey Begin, noted the frustration of being “stuck inside when we should have been going to school and seeing our friends.”

“Many of us,” Begin said, “put hours into activities” including sports and studying for SkillsUSA and DECA Inc. competition.

“It feels like all the work we put in was for nothing, but we also discovered our ability to improvise alternatives to these losses (and) we will use this creativity to tackle whatever obstacles life throws at us,” he said.

Police officer James Riley at one point was singled out for his 18 years of service as Diman’s school resource officer.

Riley, who retired last November as Diman’s SRO, said he plans to retire next January after a 38-year career with the Fall River Police Department.

In previous years, students, after collecting their diplomas, would be given a bumper sticker designed and manufactured by Diman students.

This year they instead walked away with a congratulatory wooden ornament crafted by local business Woodman Decor & More.