‘I am heartbroken for these kids’: School leaders adapt to building closures 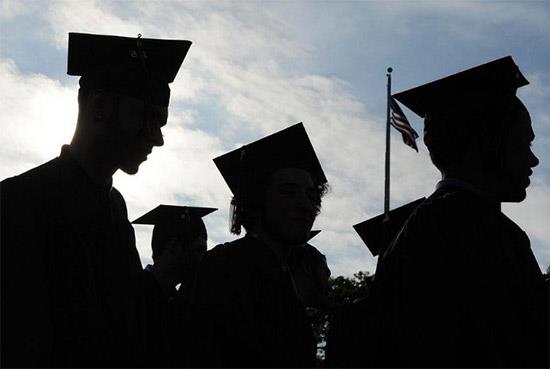 Come June, there will be no decorated mortar boards, no tassels to flip or gowns – whether worn while striding across the graduation stage or on a dance floor at prom – for local high school seniors.

It’s one on a list of challenges facing students and educators following Gov. Charlie Baker’s Tuesday announcement that the statewide closure will continue through the end of the academic year.

For now, that means the ceremonial march of graduates in orange and black down to John P. Harrington Field has been delayed from June to early August, according to Rebello.

Prom at the former Biltmore Hotel in Providence has been pushed from May 29 back to Aug. 7. Around the same time in August, the district hopes to host annual senior night and the National Honor Society where students haven’t been in nearly six weeks: on campus.

Like a growing number of districts, Diman is also “looking at virtual options” for those milestones should restrictions on the number of people who can gather stretch through the summer, Rebello said.

B.M.C. Durfee High School’s prom and graduation ceremony in June have been canceled, according to Superintendent Matthew Malone.

Malone clarified on Friday that both of those will be rescheduled, though no dates have been set yet.

“Right now there’s no Durfee graduation, and no Durfee prom,” he said. “I am heartbroken for these kids, and I apologize that we’ve had to readjust and cancel these events, but we can’t right now.”

Malone said, “We’re going to try to figure out a way to do something safely when the time’s right.

“These kids worked their butts off for 12, 13 years. And their senior years were destroyed. They’re sad, and I understand, all their rites of passage were taken away from them, so we have to find some way to make that up.”

The Fall River Public Schools superintendent said he did not agree with Baker’s decision to extend the school closure though the end of the academic year, a move that drew strong support from the Massachusetts Teachers Association.

Malone, who served as the state’s education secretary under former Gov. Deval Patrick, said he wanted to see the closure extended until the start of June.

“I understand the decision the governor made, I don’t have anything negative to say, it’s just that I’m disappointed. I would have taken a more pragmatic approach if I was still secretary, but I’m not. I would have advised schools close until June, then reassess at that time.”

In a statement to the school community, Jeffrey Schoonover, superintendent of Somerset Public Schools and Somerset Berkley Regional School District, indicated the end-of-school-year closure did not come as a surprise.

“The extended closure of schools through June has a significant impact on our high school seniors. Anticipating this extended closure, the high school began developing plans in recent weeks regarding graduation, prom, and other end-of-year activities and celebrations,” he said.

The district had not released those plans as of Wednesday, but said information about how the district will “properly end the school year while celebrating student accomplishments” will be released to students and families.

A statement Westport Community Schools released shortly after Baker’s announcement Tuesday said that “decisions about events like graduation, prom and academic awards ceremonies” will be discussed in coming days and weeks.

However, Superintendent Gary Reese was later quoted in the statement saying, “We are disappointed, like I’m sure all of our students are, to not be able to partake in the end-of-year school traditions.

“To our seniors, we wish you all the best in your future endeavors, and remember, once a wildcat, always a wildcat.”

Many districts, including Fall River Public Schools, have been offering students enrichment work that Malone says aimed to strengthen skills students had already learned before the closure.

Rebello, of Diman, said the district implemented a “sliding-scale” grading system that takes into account the hardships and disruptions facing a student and their family amid the ongoing pandemic.

“When you’re in school, you can control the environment that kids can take tests and learn in. We can’t do that at home. So we developed a grading scale for teachers to use to provide some equity for grading for students.”

“We’re going to do some teaching” starting May 5 until the end of the academic year, Malone said.

Malone said remote teaching is “going to be a challenge” as many students lack access to technology and the internet and the parents of some aren’t in a position to help their children “deepen” their understanding of the new material.

“We know that gaps will widen because of this closure. Gaps are widening across societies as we speak,” the superintendent said.