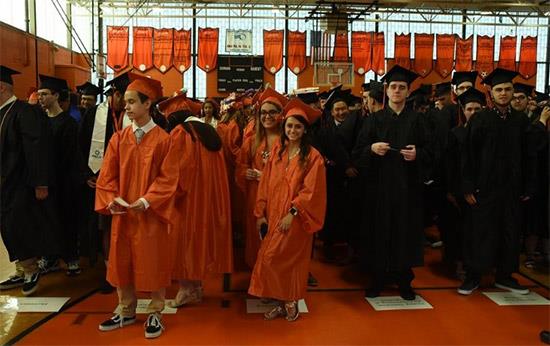 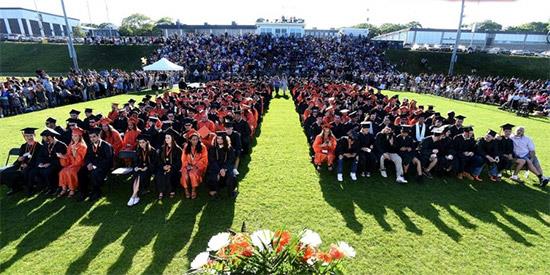 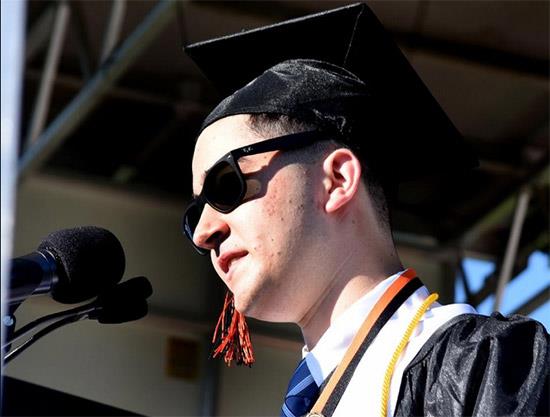 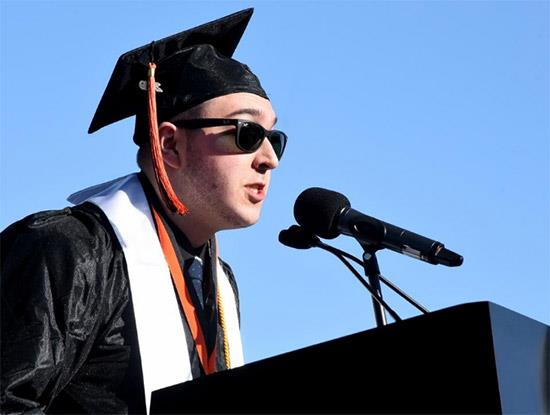 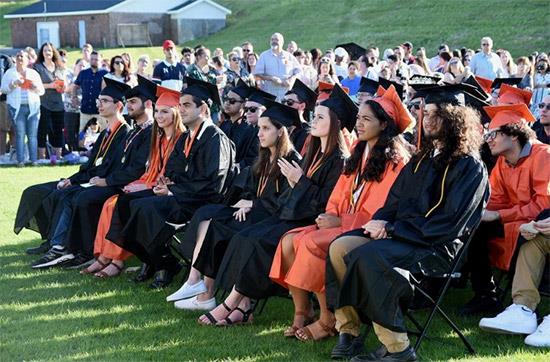 FALL RIVER — Many will go on to college, others will enter their trade, and some will join the military.

But all count themselves a proud member of Diman Regional Technical Vocational High School’s Class of 2019.

Under an evening sun so bright it had student government president Ben Ramos thanking his “great friend” and class valedictorian Marcus Banoub for lending him an extra pair of sunglasses, a total of 314 graduates received their diplomas at commencement exercises Thursday.

Graduates strode onto the John P. Harrington Field in a long snake line of Bengal orange and black, their family and friends cheering from the packed bleachers and the field flanking the graduation stage.

Class president Ramos reflected on his class’ tenure at Diman and his classmates’ senior year, a year filled with transition, passion and “unprecedented success.”

He ticked off the many accomplishments — vocational, academic and social — that the Class of 2019 notched during the four years they spent showing the world just what it means to “bleed orange.”

Diman students earned an impressive 54 medals at SkillsUSA this year, he said, and was the first class in the school’s history to take Advanced Placement chemistry, statistics and literature courses.

His classmates also learned and grew outside of the classroom, he said, lending their time and talents to the greater community by acts such as raising money for victims of the fire at Four Winds apartments in January, and helping clean hateful graffiti from headstones at the Hebrew Cemetery.
The Class of 2019 helped make Diman great by “never allowing bigotry, hate or intolerance to pervade out school,” and “never allowing a less fortunate member of the community to go without,” he said.

The crowd cheered when Ramos brought up former Superintendent Thomas Aubin, who did not participate in commencement exercises for the first time in years following his departure from the district this spring.

Banoub, the top-ranked student in his graduating class, drew playful ire from some in the audience when he compared the task of mastering life’s challenges to the mastery with which New England Patriot Tom Brady throws a football.

Perhaps, mused Banoub, if new graduate gave up years of life training, as well as “two pounds of air pressure in my football,” he could throw a football as far as Brady can, too.

Banoub doesn’t plan to pursue a career in the NFL, but he does believe in Brady’s work ethic. After all, he said, “from inaction comes a life of dissatisfaction.”

“Sacrifice the life of ease and comfort in exchange for what you believe in,” he said. “Sacrifice for your family. For your friends. For your career. For your happiness. For yourself.”

“Wear your sacrifices like badges of honor in your heart,” added Banoub.

Diman Regional Vocational Technical High School Committee member Jeffrey Begin was one of two school board members on stage at commencement, alongside the Rev. Jay Mello. Begin told graduates “this is the end of your time here at Diman, and the beginning of the rest of your life.”

Begin urged students to confront challenges head-on, and never to shy away from making difficult decisions in life.

Ferreira thanked Diman staff members for their “tireless efforts” educating students, and Mayor Jasiel Correia II congratulated students for graduating from the “best vocational school in the commonwealth of Massachusetts.” 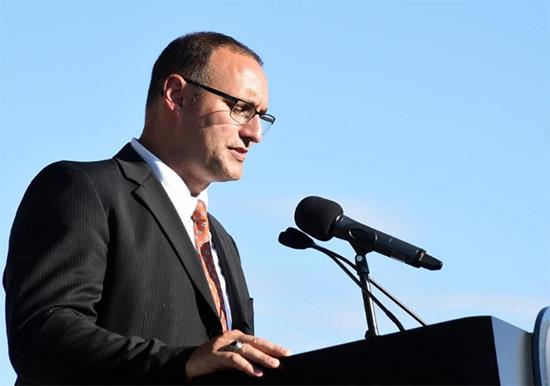