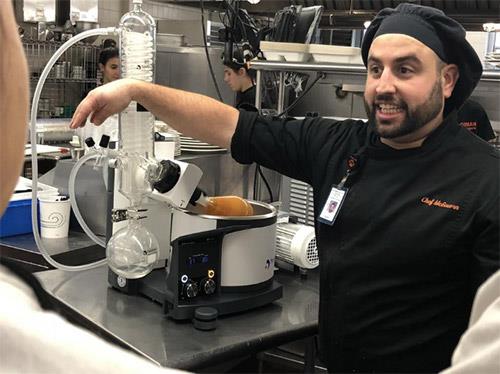 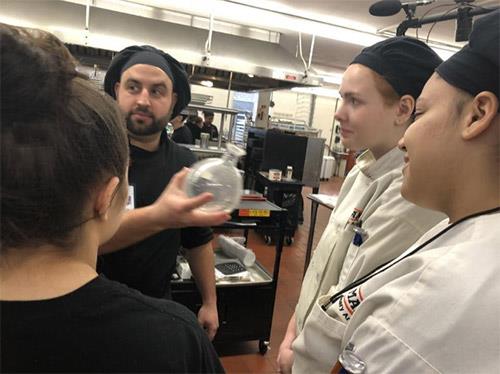 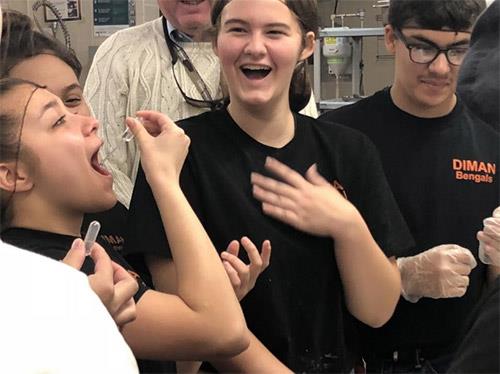 By Amanda Burke / The Herald News

Diman juniors and seniors are learning about the art of combining food and science.

The fluid looked like water, but when dispensed on the tongue revealed its origin: Pumpkin puree, the type in pantries across the country this holiday season.

McGovern teaches an after-school food science class to 20 junior and senior students, who learn at the weekly, two-hour course about the art of combining food and science.

The $11,000 evaporator, the culinary program’s newest piece of equipment, had been fired up for the first time that day. It joins a collection of equipment that helps culinary students train in techniques of molecular gastronomy.

Molecular gastronomy, a term first coined in 1988, refers to the application of scientific tools and methods to cooking, a process that culinary instructor Randy Benevides said will only become more common.

“It’s the new way of the culinary arts,” he said.

In front of him a bulb-shaped flask filled with the pumpkin puree rotated in a heated water bath. As moisture from the food evaporated, vapor traveled up a pressurized tube, then condensed to form a liquid sample that was decanted into a ramekin.

The liquid was bound for use in what McGovern described as a “transparent pumpkin pie.” The liquid would be sweetened, then gelatin added, creating a mixture that may not have the same texture as the traditional tart filling, but which McGovern said will taste right on point.

Benevides is eyeing the future.

A feasibility study the school is set to launch is an initial step toward either an expansion, renovation or rebuilding of the school with support from the Massachusetts School Building Authority. Benevides wants to see a food science laboratory in the new school.

After all, said McGovern, factors like population growth and climate change will strain society’s ability to feed the population. The cattle industry, for example, is a major source of greenhouse gasses.

Thanks to gastronomy, he said, vegetarian “burger” patties are made that taste just like the real thing, and several companies are developing lab-grown meat.

“Imagine being able to create a piece of prime rib or sirloin without having to slaughter a cow,” McGovern said.