‘A young man with a bright future’: Landon Begin honored as Swansea Student of the Year 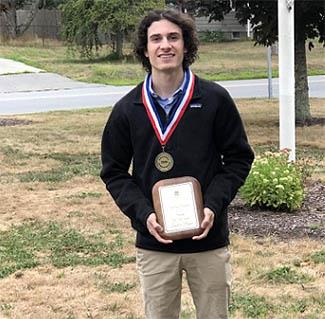 Landon Begin, a recent Diman graduate, poses with his plaque and medal for being named Swansea's Student of the YEar for 2019-2020. [Herald News photo | Greg Sullivan] 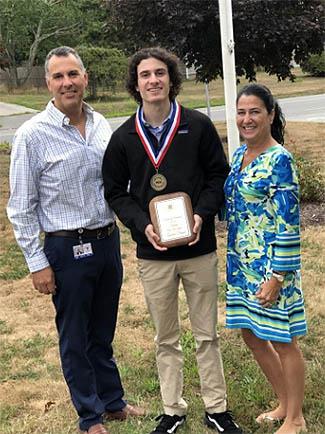 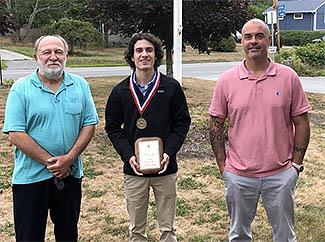 Landon Begin is flanked by Swansea resident Ed Hill, left, and Swansea Director of Veteran's Services Kevin Serpa, during a ceremony where Begin, a recent Diman graduate, was honored as Swansea's Student of the Year [Herald News photo | Greg Sullivan] 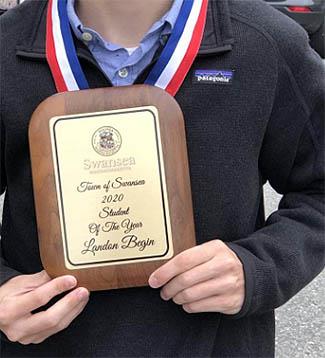 SWANSEA – Landon Begin will never have a freshman year in college. And the Swansea resident and recent Diman Regional graduate has a clear vision of earning a master’s degree from UMass Dartmouth.

A stellar student-athlete-citizen, Begin on Thursday morning was honored as the Swansea Student of the Year for 2019-2020. Three years ago, Begin’s brother Ashton, also a Diman graduate, was similarly honored. The award is presented annually by the town Veterans Services office.

Landon Begin this past school year was honored by Diman as its most outstanding student in the electronics program. He is bound for UMass Dartmouth to study biomedical engineering. Thanks to Diman’s dual enrollment program, the tenacious Begin earned considerable college credits while in high school.

“Honestly, the dual enrollment opportunities they had for me helped me out so much and I was able to just kind of chip away at college while I was there throughout my four years,” Begin said on Thursday outside the Swansea Town Annex offices on Stevens Road, where he received his Student of the Year plaque and medal. “And now I can look forward to my next four at UMass Dartmouth, where I’ll be going for a master’s in biomedical engineering. And because of my credits for dual enrollment, I’ll be starting off as a sophomore this fall.”

Diman’s academically top-ranked senior, Begin earned high honors for all four of his years and, through the school’s Cooperative Education Program, he worked as an electronic technician intern at Island Tech Services in Rehoboth.

Athletically, he participated in golf, ice hockey, indoor track and field and tennis, and he was this newspaper’s Player of the Year in golf in 2018. Also in golf, Begin was a two-year captain, three-time league all star, three-time team most outstanding player, and helped the Bengals win two Mayflower Athletic Conference Championships.

“A very respectful student athlete, respected by his peers as well as opponents on the court or golf course,” Lenny Dutra, Jr., Begin’s coach in hockey and tennis, said in a text. “A student athlete who takes as much pride in his academics as much as his athletics... a leader both on and off the court/course .... a young man with a bright future !!!”

Beyond Diman, Begin volunteered with the Swansea Ambulance Corps from 2017 to 2020.