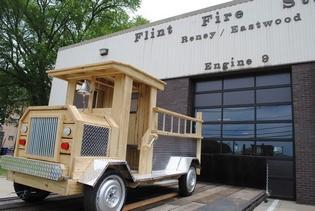 FALL RIVER — The Flint Fire Station has plenty of equipment to show off when visitors come to call.

There are engines, a ladder truck, a rescue.

But the visitors leave no doubt about the most popular piece at the station, firefighters say.

“I don’t think a week goes by that we don’t have a kid ask when we will get the little truck back,” Firefighter C.J. Pontes said. “So this is great.”

Pontes and his fellow firefighters were gathered around the 15-foot wooden fire truck that was delivered from Diman Vocational Technical High School on Wednesday afternoon.

The station had a wooden fire truck in front of the station, facing Eastern Avenue and Lafayette Park, for a decade after firefighters built it in 2003.

Every day, as schools let out, neighborhood children stopped to climb on the truck and ring its bell.

That ended in 2013 when a car swerved off of Eastern Avenue, skidded across the station driveway and plowed into the truck, reducing it to splinters.

Fire District Chief Jeff Bacon, who was the captain at the Flint Station in 2013, called the faculty at Diman and asked what they could do.

Stephen Marciszyn, head of the Carpentry and Cabinetmaking department at Diman, delivered the answer Wednesday. 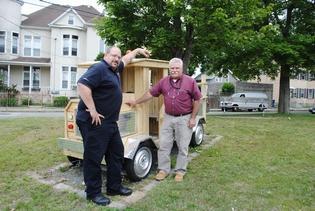 The new truck is made of pressure-treated wood with diamond plate aluminum on its sides and truck bed. Wood and pipes make up ladders on the side. The truck has sirens, lights, fire extinguishers and the bell salvaged from the old truck.

Students in the Metal Fabrication and Joining Technologies shop fabricated a steering wheel from steel and embossed FRFD in its center.

“They wanted to replace the truck but they wanted to make something that looked different. They did a good job.”

Few of the Diman students needed to be told about the fire truck, Diman Superintendent-Director Marta Monteleon said.

“Almost all of them knew about the truck,” she said. “Most of them had played on it at one time or another."

“They were happy to be able to put it back.”

Students designed and built the truck. The Drafting, Electronics, Metal Fabrication, and Carpentry students all got involved, Marciszyn said. Students in the Auto Collision Repair and Refinishing shop searched out salvage tires — four matching doughnut spares — that they painted silver and contributed to the cause.

The truck was installed on the cobblestone and gravel pad at the front of the station where the old truck had been. Shaun Tavares and Alan Benevides from Diman delivered the truck on a flatbed trailer and put it into place using a front-end loader.

The truck will be wired into an electric box that is run to the truck’s parking place, firefighters said.They added it is good that the truck was installed before school let out.

“Come back after dismissal,” Pontes told the Diman crew. “You will see your work getting used.”