The Eiffel Tower comes to Diman

Gillis poses with his model 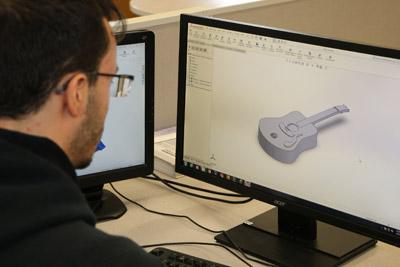 Working on the next project - a guitar
Diman senior Drafting student Tyler Gillis couldn’t make it to Paris, so he brought a bit of Paris to Fall River. Unable to join the International Club’s trip to Paris in during his freshman year in 2013, Gillis was inspired to build a model of the Eiffel Tower on one of the program’s 3D printers.

“I always liked French culture and I’ve taught myself a bit of French,” explained Gillis. “I didn’t get to go on the trip, so I ended up working on this instead.”

Gillis worked on the project during spare time in his shop, taking more than a year, and several prototypes, of the model to complete the model. “It was an intense project,” said Drafting Department Head Mitch Sweet. “He took it on by himself as a side project in addition to his daily shop work.”

The tower model was originally built as a single unit, but that proved untenable and not as accurate as building it in sections. “It was better as an assembly in three parts,” grinned Gillis, “Then, I thought it’d be cool to build it using the colors of the French flag.”

The process of designing the tower was a lengthy one. First, Gillis spent time looking at various pictures of the tower from different angles, then researching details of the iconic structure. “I found a schematic that had the dimensions in meters, which I brought down to millimeters,” he said. “I had to adjust various parts by a millimeter or two, but it’s pretty accurate.”

“When you look at his work, the attention to detail is remarkable,” enthused Vocational Coordinator Maria Torres. “To say that I’m impressed with Tyler’s work is an understatement. I’d say Tyler has mastered the art.”

Each part of the tower takes 15 hours to print, with a total construction time of 45 hours. Gillis used the Drafting program’s Stratasys Dimension 1200es printer, one of four machines in use by the shop. The Dimension 1200es uses extruded ABS plastic to build the objects layer by layer, but the program’s newest machine, a Stratasys Objet30 Pro, uses resin and ultraviolet light to cure each layer as it’s being built.

“Typically, when students have side projects, we run the printer overnight so we don’t interfere with classwork,” said Sweet. “We have students designing and building anything from customized phone cases, to keychains and personalized Christmas ornaments. We even have a student working on a scale x-wing fighter from Star Wars.”

Sweet appreciates when students take on side projects. “We promote it, because the more they’re doing, the more they’re learning. The 3D printer is very popular … now they can do more than conceptualize the part: they can actually make it, use it, touch it,” he explained.

“Students are working with 3D technology from freshman year right on through senior year,” said Sweet. “The two MakerBot Replicators on the freshman/sophomore side have been running non-stop, because the students enjoy seeing something that they put time and effort into become something real, not something printed on a piece of paper to hand off to a machinist or fabricator.”

The printers are leading to an evolution of the Drafting program. “We’re gradually purchasing new equipment and heading toward the goal of creating a Rapid Prototyping Lab in the Drafting shop,” said Sweet.

Thankfully, it doesn’t take a lab for students to receive major benefits from 3D printing. “I learned a lot about the finer points of SolidWorks,” explained Gillis. “I also learned a lot of little details and skills, like how to take one side of three-dimensional object and adapt it to a four-sided structure.”

He also learned a thing or two about persistence, saying, “If you have the time and stick with it, you can do great things.”

Next, Gillis will take the skills he learned from the project and apply them to a bigger project: printing a guitar!