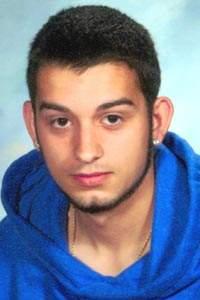 George Tavares Jr. of Fall River died early Tuesday morning at Rhode Island Hospital, where he’d been a patient since the accident on May 19.

His funeral will be held Friday at the Silva-Faria Funeral Home in Fall River.

He was a son of George Tavares and Susana Vertentes and had six brothers and sisters. He would have been a senior at Diman Regional Vocational Technical High School. An older sister, Jade Souza, graduated from Diman in 2011.

Diman Superintendent-Director Marta Montleon said Tavares was a student in the automotive technology shop who was excited about working on cars and engines and had a good career path. She said he was on track to graduate as part of the Class of 2015.

Montleon said students and staff alike were fond of Tavares.

“He was just of those kids everyone liked, an all-around good kid,” she said.

She remarked how teachers “aren’t supposed to have favorites” — but he was one of theirs.

“It’s definitely a hard blow for all of the students that knew him,” Montleon said.

“George was a terrific student. He loved his trade. He loved cars. He very much loved motorcycles,” said Brian Bentley, Diman's assistant superintendent-director/principal.

Bentley said that, on the day of the tragic accident, Tavares had gone to try out a motorcycle that a fellow-student was selling.

The principal received a phone call after school about the accident and said he immediately called Tavares' mother. He asked what the school could do.

During the past couple of months, Diman held a fundraiser to help with medical bills while Tavares was hospitalized. Debbie Pacheco, director of special education whose program provided services for Tavares, remained in touch with Tavares' mother and made regular visits to the hospital, Bentley said.

He said Tavares underwent an operation but school officials were told he suffered head trauma and it was “a very severe injury.”

According to police reports, Tavares suffered the life-threatening injuries while riding a motorcycle on May 19 about 3 p.m. on Varley Street, which runs off Bedford Street near Blount’s Seafood.

Police had said the accident happened when his motorcycle was traveling the wrong way on Varley Street, a one-way, and crashed head-on into a Pontiac Grand Prix that was traveling slowly. He was thrown from the motorcycle.

Police with the accident reconstruction unit determined speed was not a factor in the crash and that Tavares, who was alone on the motorcycle, was not wearing a helmet, spokesman Lt. Ronald Furtado said.

Montleon and Bentley said the school learned of his death from Tavares' family on Tuesday. On Wednesday night, Bentley said he sent out an message to all staff and faculty and students in the Class of 2015 to inform them and give the funeral arrangements.

“He was in our prayers every day,” Bentley said.

“There’s nothing worse than losing … someone so young, so vibrant. Their life is just beginning. It’s very sad,” he said.

Bentley, who has spent 38 years at Diman and is retiring after the school year opens, also said, “In my opinion, it’s like losing a member of the family because we all know each other. It’s a tight-knit group. George had lots and lots of friends here.”

Bentley said he wants to help ensure that “the senior class never forgets George and pays special tribute to George both at the opening of school and at graduation."

"We will never forget him as a member of the Class of 2015,” Bentley said.