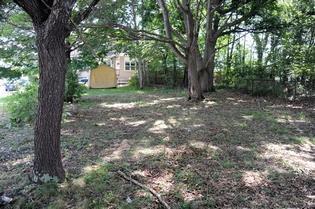 FALL RIVER — After a few years during which Diman Regional Vocational Technical High School students and teachers have collaborated on other community service projects, this fall, they will be building a house.
Starting in September, about 50 Diman seniors and juniors in various shops — including carpentry, plumbing and electricity — will be leaving their shops and heading to an actual construction site. Every two weeks, students will rotate to build a ranch-style home with a one-car garage at a site that is currently a vacant lot with several trees on a small hill at the southwest corner of Chicago Street and Stafford Road.

That home will then be used as a housing unit for veterans.

“We are delighted to be back in the house-building business,” said Diman Superintendent-Director Marta Montleon during a groundbreaking for the project Wednesday morning.

The school had previously partnered with People, Incorporated and the CDA on past projects, Montleon said.
Diman Assistant Director-Principal Kyle Alves said the project is the result of “a tremendous partnership.”

That the house will be used as veterans housing was of particular significance for him, he said, because of his family’s history of military service: Alves’ grandfather served in World War II, his father in the Vietnam War and his brother-in-law in the recent war in Iraq. 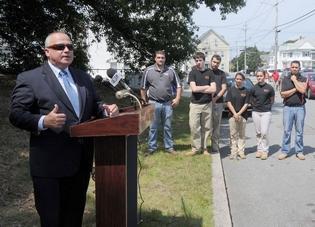 “This gives the students a sense of giving back to the community,” Alves said. “They know the house is going to go to someone who needs it.”

Describing the project, Heath Chouinard, a building and property maintenance instructor, said, “Generally speaking, the group of Diman shops does everything — plumbing, electricity, roofing, flooring — everything.”

The home will also be energy-efficient because students will install solar panels on its roof and build it to meet current green building standards.

A contractor will install the house’s foundation this month, and when school resumes, students will begin work on the project. The home is expected to be completed by next June, 2016.

Longtime carpentry instructor and now-department head Manny Botelho said students will also learn from participating in the project, as it aligns with Diman’s curriculum.

Carpentry instructor Jeffrey Cabral will oversee the project. Cabral said as a former Diman student and later in the industry he had been involved in previous house-building projects.

“It’s great to be able to pass my technical skill and knowledge on to the students,” he said.

Students met with a few veterans on hand, as well as city officials, including Mayor Sam Sutter.

“I’m looking forward to your work,” said Robert Viner, the vice commander of the Veterans Council of Greater Fall River, to students.

“We’re very excited,” Viner said. “I think this is needed in the community. A lucky veteran is going to have one heck of a good house.”

Sutter said the project fits in with ongoing efforts to rebuild and improve the city of Fall River. He called it an example of the “spirit of cooperation” and a “noble and important” endeavor.

Dion said CDA has worked with Diman on similar projects in the past.