All in the Family: Moniz sisters keep it real at home and on Diman, Westport tennis courts 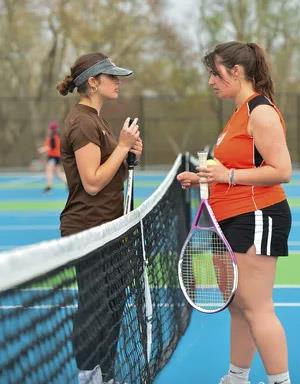 WESTPORT — Joseph and Lucy Moniz have maintained one specific rule in their household of 10 for nearly three decades.

Each of their children must participate in high school sports.

The Westport couple feels sports teach you things beyond what you learn in the classroom.

"What are they going to do in life," Joseph Moniz said. "They will always go against people who are better than them. You can't be the best at everything. I encourage them to keep going in the right direction."

"College is different, and it's demanding," she said. "You have a job and all that. So enjoy this and participate as much as you can."

Both Sarah (junior) and Lindsey Moniz (sophomore) attend Diman Regional Vocational Technical High School. Gloria Moniz is an eighth-grader at Westport High School. She will transfer to Diman next fall.

"They play sports year-round, either basketball, soccer, or anything," said Joseph Moniz, who played for the Bengals boys tennis team in the late 1970s. "They are used to competing against each other, and it's all in good sportsmanship." 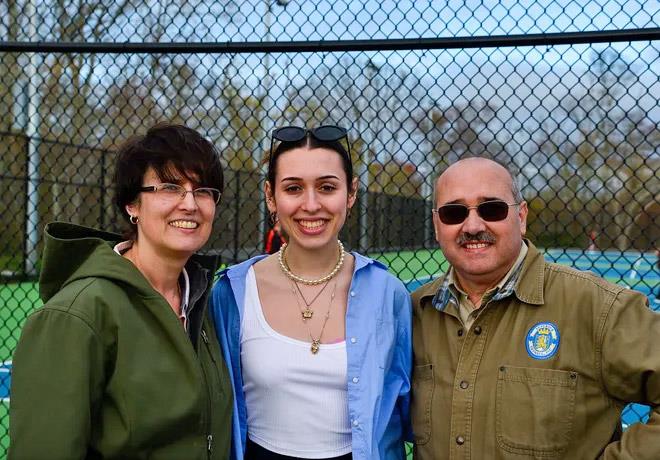 When his kids were young, instead of paying money for them to play in travel and club sports, Joseph Moniz invested that money in his home, building a large tennis court inside their house where they play all their sports year-round.

"It's called spending time at home," he smiled. "That's what we do, stay home, instead of becoming a taxi [and] driving kids to different sites."

Lucy Moniz, who said she also enjoys tennis as a leisure activity, said the more exercise the kids get, the better they will excel in their sport. 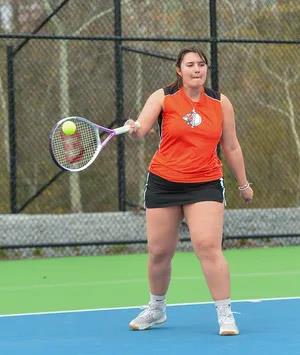 When they don't play sports, Lindsey and Sarah Moniz participate in the DECA club at the high school. Their work will be heading for nationals.

Allison Moniz, 32, was the original pioneer for the younger girls when it came to tennis.

She played at Westport until her graduation in 2008. Audrey Moniz, 21, also played tennis. Emily Moniz, 19, graduated from Diman in 2020 and attends UMass Dartmouth. She was a part of the first Bengals girls' tennis team that started as a club team. Her senior season got postponed due to COVID-19.

When Diman and Westport's tennis teams met in a match recently, Sarah and Gloria Moniz faced off against each other in a head-to-head second singles match, at Westport's Dianne B. Snyder Tennis Complex. 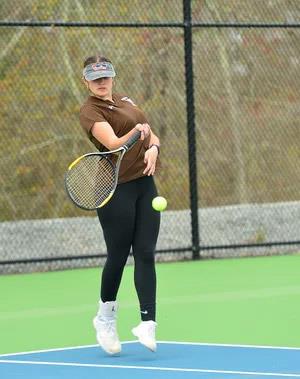 "It was an adventure," Sarah said with her match with Gloria. "I don't know, it is a little bit intimidating for sure. Yeah, at home it is more playful."

"It is definitely like what Sarah said," Gloria added. "But it's totally different playing for schools. It can get more competitive. But it's always fun playing against your sister. It is a different mindset."

So which one was Mom and Dad rooting for?

"I root for all of them to do their best, and whatever happens, happens," she said. "Hopefully, they're good in whatever the outcome is."

"I don't care," he said. "I always tell them to play their best at their level. My boys know that as well. Your ability is strictly doing your best. When you play your sister, just play your best and she is going to do the same thing back. The kids are good about it."

Sports in their veins 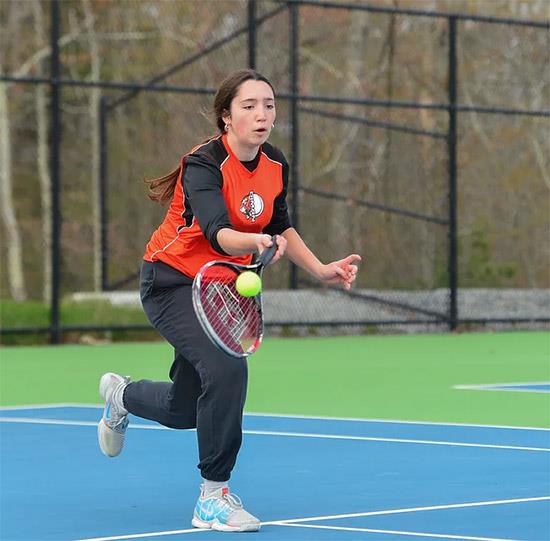 Sarah, Lindsey and Gloria are quite active when it comes to sports.

Sarah and Lindsey each play volleyball for the Bengals in the fall. Lindsey was named a Herald News All-Scholastics first-team member. Sarah is an excellent server and comes up with big digs on the backline.

Sarah, whose tennis record is 3-2, said her sport is volleyball but plays tennis because it is outdoors.

"I feel less anxiety," she said. "It is more of a second sport for me. I feel like I can keep moving but not as intense. It is that season for me to keep moving.

Lindsey was unable to comment because she was playing a first singles match against Wildcats' best player Kaelyn Jones. Lindsey won the match to remain unbeaten on the season at 4-0.

Gloria started out with the second doubles team as a seventh grader before moving up to second singles this year. She currently holds an 8-3 record. Gloria played soccer like her brothers before turning to tennis.

"Gloria's play this year has been tremendous," Westport head coach Matt Kampper said. "Her first serve has been consistent and is tough to return. It is a lot more powerful this year."

Diman head coach Steven Camara said it is a pleasure to coach Lindsey and Sarah.

"They are wonderful kids," he said. "I just started coaching this year and it is amazing to see these two kids play. They are both wonderful ladies. Lindsey has a nasty serve and Sarah plays consistently well." 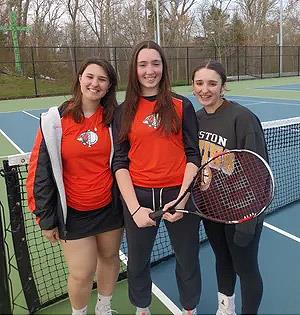 Next season, there will be three Moniz sisters playing sports for the Bengals.

Kampper said it will challenging playing all three next spring.

"I have to go against them in the next four years," he said. "It is going to be tough."

"It is going to be a battle royal for first, second and third singles I will tell you right now," he said. "I will have some depth and great challenging matches. It will be really fun to see how it all plays out. But it will be exciting to coach three Monizes."

So it shouldn't be hard for Mom and Dad to pick rooting interests during competition next spring. They can fully bring their Bengal vocal cords.

"All the Moniz kids have been phenomenal student athletes and great kids," Kampper said. "You wish you could have 20 of them in every class."