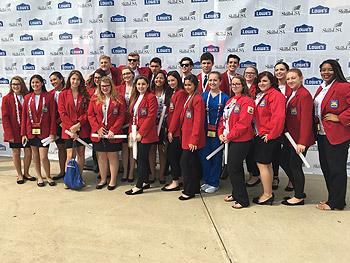 Despite violent weather and fierce competition, Diman students thrived at the SkillsUSA National Leadership and Skills Conference in Louisville, KY last week. The school’s 13 medals earned 20% of Massachusetts’ haul, including a gold medal by Isabella Rodrigues.

Rodrigues, of Fall River, showed her considerable violin demonstration skills to earn a gold medal in Job Skills Open. Other individual medals were earned by Ally Toupin, who won bronze in Job Skills A; Noah Gouveia, who earned a bronze medal in Cabinetmaking; and Hannah Amarantes, who won a bronze in Medical Terminology.

“We can be proud of how all our students competed and behaved in their competitions and throughout the week,” said Superintendent-Director Marta Montleon. “Everyone represented themselves, Diman, and Massachusetts well.”

In addition, Graphic Communication sophomore Shaun DaRocha was honored at the Opening Ceremony for his National Pin Design on Tuesday, June 21st with his family in attendance.

77% of Diman students finished in the top ten in the nation in their contests.

“After experiencing some difficult travel arrangements and several violent summer storms they all kept their focus and minimized any effect on their performance,” said SkillsUSA Advisor Karl Cabucio. “We had a great group of teacher/advisers that gave a week away from their families and a mature group of young adults that represented their town, school and state with distinction.”