DaRocha and his design 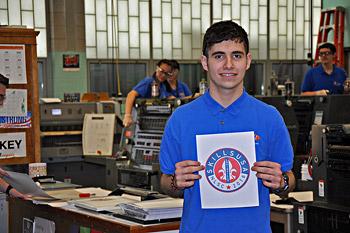 March Madness began early for Diman sophomore Shaun DaRocha when his long shot hit paydirt in the SkillsUSA National Pin Design Challenge. Nobody from Massachusetts had won in 15 years, and the state has only won once in 51 years, but he and another Diman student took a chance and submitted designs anyway.
He was named this year’s winner on March 11.

“At first, I didn’t believe it,” said DaRocha with a grin. “It was a surprise to me. I didn’t think I had a shot to win, at all.”
“I looked at modern designs and thought that if I did a circle, it would work for both the shirt and pin contest,” explained the Somerset resident. “I did the circle first, then built off that.”
His advisor, Graphic Communications instructor William Berlo, understood why DaRocha took the prize. “The design is very clean and simple,” said Berlo. “It looks great on a pin, so we can see why he won.”
“We’re very exited for him,” said Berlo. “The whole school is.”
“It’s an outstanding accomplishment,” enthused Assistant Superintendent/Principal Kyle Alves. “His success is a testament to the hard work that Mr. Berlo and our Graphic Communications program puts into teaching our students cutting-edge design skills that enable them to express their creativity.”
“SkillsUSA Massachusetts is proud to congratulate Shaun DaRocha, this year’s winner of the SkillsUSA National Pin Design Challenge,” wrote SkillsUSA Massachusetts on their Facebook page.

DaRocha will be honored at both the Massachusetts SkillsUSA State Leadership Conference in Marlboro on April 28th and again at the National Leadership and Skills Conference in Louisville, KY in June.
The entry was a true buzzer-beater. “You have to give credit to [SkillsUSA Advisor] Mr. [Karl] Cabucio, because we handed it in on the last day and he had to overnight it,” said Berlo. “It’s another case of him going the extra mile.”
Contact:
Nathan Byrnes, Media Services Coordinator
nbyrnes@dimanregional.org
Copyright © 2002-2022 Blackboard, Inc. All rights reserved.