Diman students leave a gift of warmth in Kennedy Park 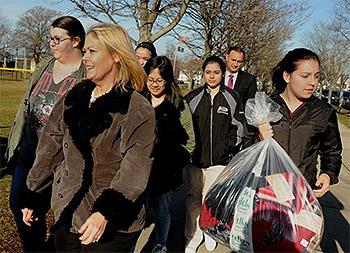 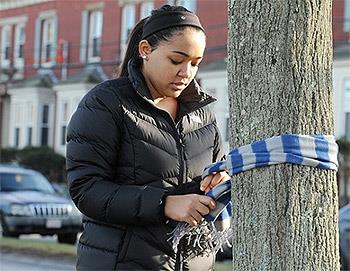 FALL RIVER — It was nearly 50 degrees out Tuesday at 1 p.m., with sunshine.

But you can get cold standing around outside in that kind of temperature, and it’s December in Massachusetts, so the 50 degrees wasn’t going to last.

In recognition of meteorological truth and in recognition of need, a group of students from the Key Club at Diman Regional Vocational Technical High School showed up in Kennedy Park on Tuesday with 50 warm scarves that they tied to trees and fences for anyone to take.

“They’ve been involved with a lot of the area communities,” he added.

As a regional vocational school, Diman takes in students from Fall River, Somerset and Westport, so the Key Club does community services in all three communities.

“Some of the scarves are handmade, and some are bought with donations,” said Jeannine Carreiro, faculty adviser to the Key Club.

It has been a busy couple of weeks for Diman students on the giving beat. This past Friday, Diman students delivered over 1,000 toys to Citizens for Citizens, Fall River’s anti-poverty agency.

“This was something they wanted to do,” Carreiro said.

Carreiro said that, while the hanging scarves idea goes well with the holiday season, the need is ongoing and the effort will also continue.

“We’re going to come back and see how the turnover is,” she said.

The students fanned out from the bus quickly, one of them carrying the bag of scarves. Ferreira is a tall man, so he was the one chosen to tie scarves from tree limbs. Other scarves were tied around tree trunks or tied to fences.

Senior Harley Cippollini moved swiftly, tying a scarf here and there, to a tree trunk or fence.

Every scarf bore a good-sized brown paper tag that read, in part, “I am not a lost scarf, it’s love in my stitches.”

And Cippollini knows that, while the scarves provide real physical warmth, they also provide something else for those who untie them from a fence or a tree.

“It’ll make them smile,” she said. 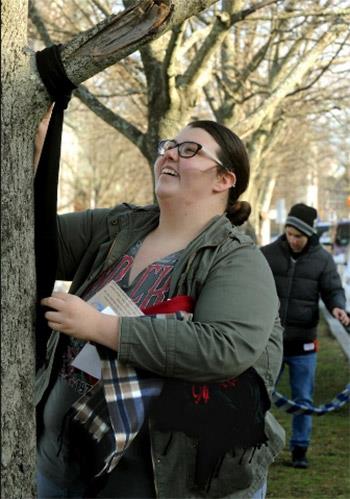 Diman senior Harley Cipollini ties a scarf in a low branch of a Kennedy Park Tree Tuesday, in the hope that one of Fall River’s homeless will take it to keep themselves warm. [Herald News Photo | Jack Foley] 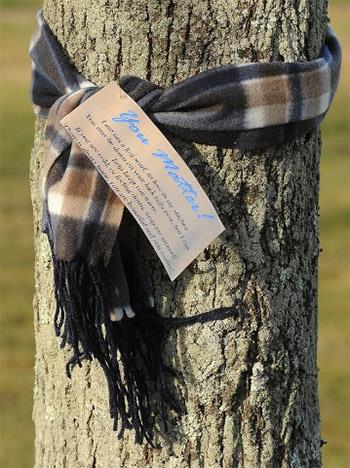 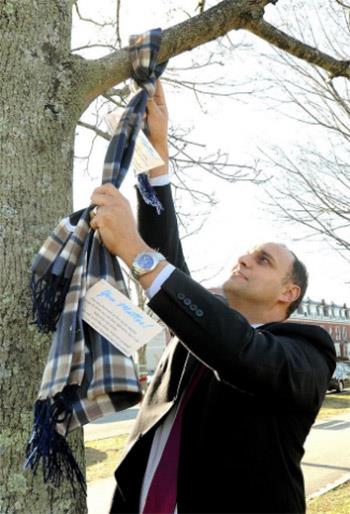