The season of giving at Diman

Charity and giving is a year-round event at Diman, but the holiday season brings out additional efforts. In 2015, Diman is helping to feed the hungry, clothe the needy, give toys to the young, and assist the afflicted. Together, these efforts continue decades of holiday giving at Diman. 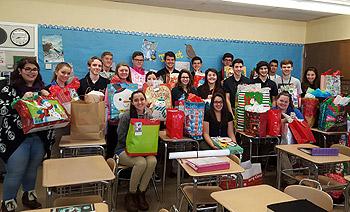 Every year, Diman’s chapter of the National Honor Society takes on the Salvation Army’s Clothe-a-Child program, where students provide a coat or an outfit for children aged 3-12, but they quite often go well-beyond a coat or an outfit.

“Our kids love, LOVE doing it,” grinned NHS Advisor Trish Beaudoin. “I see so many extras come in with the clothes and outfits, some do two outfits or a coat and an outfit.” Many students also add toys, gloves, socks, hats, and stuffed animals to their contribution.

This year, the NHS students helped 70 young members of the greater Fall River community. In addition to student donations, quite a few members of Diman’s staff also contribute clothing or money. “I usually go out with (co-advisor) Ray Machado and students to buy more donations,” explained Beaudoin.

“It’s so worthwhile,” she enthused. “It always makes my students feel like they made a difference, like they accomplished something good. It’s important for them to understand the idea of giving back to the community, and I think that this event really showcases what the NHS is about here at Diman.”

The NHS accomplishes all this in approximately two weeks. “They like to have everything by December 10th,” explained Beaudoin. “Thankfully, we also get (non-NHS) volunteers to help deliver everything.” 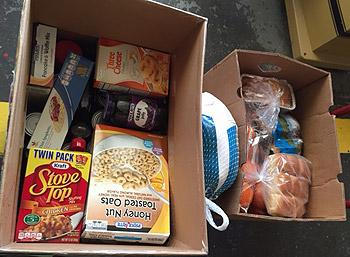 This year, Diman Key Club’s Annual Food Drive provided a holiday turkey, along with a bountiful food basket, to 88 community families. In addition, a significant food donation was made to a local food pantry.

The drive began at the annual pre-Thanksgiving pep rally, where students were encouraged to bring a canned good as their entry fee to the rally. Following the Thanksgiving break, donation stations were set up in every shop to gather students' and employees' non-perishable food contributions. The shop that collects the most food items was awarded the “Golden Can” trophy, which was awarded to Electronics Shop for the third year in a row, with Health Assisting coming in second place.

Diman faculty, staff and administration bolstered the Key Club's effort through a "Take a Turkey to Work" drive, cash donations, and participation in the Key Club’s “Casual for a Cause” Fridays. The school’s HVACR program played an important role by providing the freezer space in the guise of a refurbished ice freezer, which they maintain for this yearly event (with any spillover turkeys being housed in the cafeteria freezers). In addition, the Culinary Arts program sponsors a gingerbread house fundraiser that raised $450 for the purchase of additional food.

Once Key Club members sorted and dispersed all the food among the designated number of baskets, the donated money was used to supplement the food baskets with fresh produce and food staples such as peanut butter, macaroni and cheese, cereal, pancake mix and more. The finished baskets lined the stage in Diman’s auditorium, turning it into a temporary food bank, where the recipients came to pick up their bounty.

Key Club advisor, Susan DeJesus, declared her appreciation for the support, saying, “If so many people didn’t contribute, this just couldn’t happen on this scale. The drive couldn’t have grown from 17 baskets to nearly 90 baskets without all the support from the Diman community.”

Some of Fall River's less-fortunate children had a better holiday season this year thanks to Diman's Dental Assisting program. With the assistance of Diman's staff and students, the dental program gathered 106 toys to be donated to the Citizens for Citizens' Operation Christmas toy drive, up from 85 last year.

Instructor Maria Torres pointed out how critical it is to consider others, "It's important that no matter what your personal struggles are, you remember others during tough time."

Junior Tania Melo agreed. “It made me feel really good because a lot of kids don’t get Christmas presents. It feels good to make people happy and make them smile.”

The spirit of the season also gripped fellow junior Gabriela Vultao. “It was really nice knowing these kids are going to wake up to presents on Christmas morning,” she grinned. “It made us feel really good to know that we were making kids happy.”

Finally, Diman is reaching out to help a fellow member of the voc-tech family, raising over $1,000 towards cancer treatments for Cyra Hathaway, a vocational coordinator at Blackstone Valley Voc-Tech.

Hathaway, formerly a teacher at Southeastern Voc-Tech, is battling cancerous brain tumors. The 35-year old single mother of two has been heavily involved with SkillsUSA Massachusetts, where she became close friends with Diman teacher Suzanne Ramos.

On behalf of SkillsUSA, Ramos is spearheading the effort at Diman. The school has held a Boston Bruins raffle to raise money, has received donations from the staff (including a generous donation from the Graphic Communications program), and donated one of the Key Club food baskets, as well as gift cards for Christmas presents and grocery stores.

“It’s very warming to see that people care about what’s happening in other people’s lives and that they’re willing to do something about it,” said Ramos. “When I brought the stuff to her, it brought her to tears. She was so thankful that people she didn’t even know were helping her.”

“She’s like a sister to me,” explained Ramos. “It’s like people helping my family, and that means a lot.”

Donations to Hathaway’s cause can be made at https://www.youcaring.com/dedra-cyra-hathaway-482776 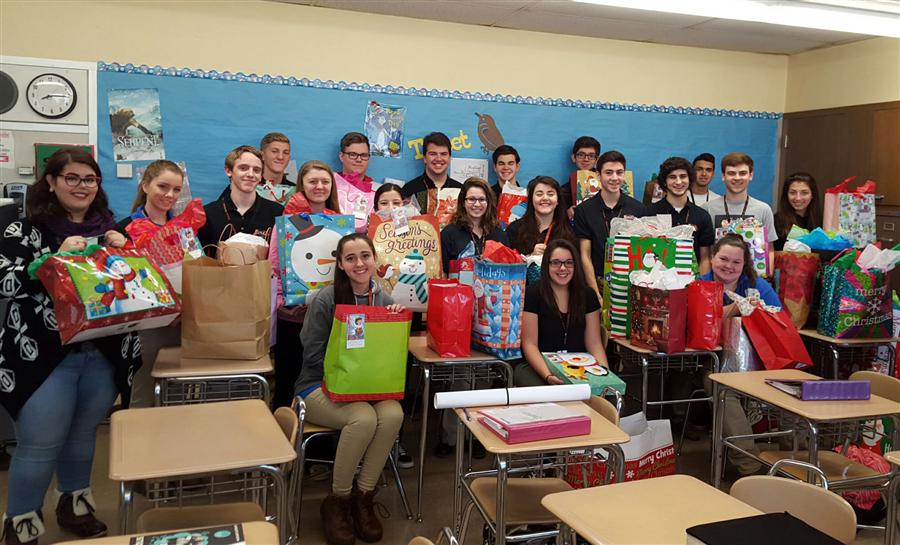